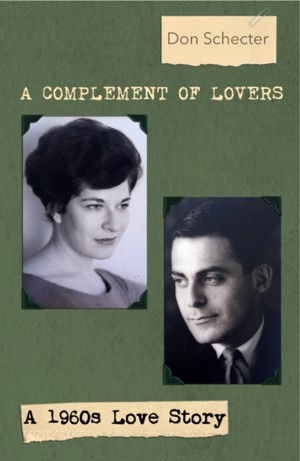 A Complement of Lovers

Before Masters&Johnson, each man had to figure out what normal was on his own. In this unusual love story set in the 1960s, a 25 yo questions his sexuality. He appears to enjoy a bevy of beautiful women, but his bravado masks a total lack of experience and a dogged adherence to an outmoded moral code.Then he meets a forward-thinking woman who holds all the answers, and everything changes for him. More
It's the early ’60s in Washington, D.C. — the Camelot years. Conservative. Law abiding. Morally restrictive. No sex unless you’re married — not with a nice girl, anyway. At twenty-five, Rodney Brody is seeking answers to a problem he can’t admit he has. The girls he meets are off-limits because of their religion or strict upbringing, while the difficulties he encounters with the available ones make him question his sexuality. He's ready to throw in the towel and admit he’s just a guy on the outside, watching everyone else have fun at the party.

On the local theater scene, Rodney meets Meg Harman, a confident young woman who leads a liberated lifestyle ahead of the times, while harboring a damaging secret of her own. In a nuanced narrative as stylish as a Mad Men plot, Rodney and Meg struggle to resolve their problems despite the strictures society places on them. Can two outsiders provide the answers each is looking for?
Available ebook formats: epub mobi pdf lrf pdb txt html
First 20% Sample: epub mobi (Kindle) lrf more Online Reader
pdb
Price: $1.99 USD
Buy Add to Library Give as a Gift
How gifting works
Create Widget
Tags: romance dating relationships sexual situations sexual discovery multiple sex partners 1960s fiction
About Don Schecter

About the Series: A Complement of Lovers

Life happens to two young people who are determined not to make the usual mistakes in love, marriage, and child-rearing. Starting with innocence in the 1960s (volume 1), growing through the 1970s (volume 4), Rod and Meg try to define their life paths, reacting as necessary to accommodate unexpected twists.

Each of the five novels stands on its own, but together, they form a narrative of a family coping with unexpected turns and changing moral codes.

Also in Series: A Complement of Lovers

Reviews of A Complement of Lovers by Don Schecter

You have subscribed to Smashwords Alerts new release notifications for Don Schecter.