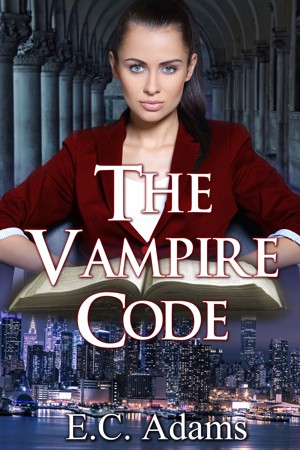 By E.C. Adams
Rated 4.50/5 based on 2 reviews
An Urban Fantasy Romance about a young lawyer from Manhattan who becomes the target of human hate-groups and of the much more dangerous Vampire Resistance, when she agrees to defend a vampire wrongly accused of murdering a human. In the mayhem that is now Aurora's life, there is still space for love, when chance brings her in contact with the sexy, stoic, vampire, Sebastian Fiscard. More
An Adult Urban Fantasy Romance set in a United States where vampires are another oppressed minority in search of cultural acceptance, and featuring a ruling family that wants to change that - the Fiscards.

As part of their plan to connect with mainstream mortal America, when one of their own is unjustly accused of murdering a human, the Fiscards hire one of New York's hottest young attorneys — a young woman by the name Aurora Lake — to stand by them in Vampire Court.

But not every vampire wants to be assimilated, and not everybody approves of the obvious attraction between Aurora Lake and the vampire Sebastian Fiscard.

As they struggle with their own feelings and with unseen, ancient forces trying to put a stop to their work — and to Aurora — will Aurora and Sebastian overcome The Resistance? And what about their resistance to what their own hearts, mortal and immortal, know to be true?

E.C. is a mother and a lawyer and she lives on the Mediterranean island of Malta, where she can enjoy some 300 days of sunshine a year.

She likes entertaining and hosting parties at home, and has a penchant for expensive things.

I received this book free from the author in exchange for an honest review.

The Vampire Code is the story of Aurora, a young lawyer whose life changes after she is chosen to represent a vampire accused of murder. She is excited to be the first human to practice in Vampire Court, but soon finds herself embroiled in a life that is completely different from anything she could have anticipated when she met Sebastian Fiscard.

E.C. Adams does a great job describing the personality of Aurora. She is the type of lawyer that I would want defending me in court! I enjoyed her interaction with the jury in Vampire Court and liked how she was such a strong female character. Aurora was extremely believable in her actions as she adjusted to perilous situations that would have weakened the meek.

Sebastian in my mind was just a total hunk and he seemed extremely caring in the way he watched over Aurora even before either expressed their feelings for each other. I would have liked for him to have been a little more affectionate with Aurora at the beginning of the story, just so I could have understood why she fell so quickly in love with him. But you know what, who wouldn't want to fall in love with a gorgeous vampire like Sebastian!

Vampire Code had a great supporting cast. I fell in love with Sebastian's mother, Ani, and would definitely want her watching after me! I loved Sebastian's brother, Alexander, and thought he added some great comic relief to the story. The scariest character had to be Sebastian's sister, Hespera. She scared me to my core and is not a woman I would want to cross!

The second half of The Vampire Code was my favorite part as it was full of action. I was continually surprised by situations that I did not see coming and that kept me reading late into the night. E.C. Adams had quite a few tricks up her sleeve with this novel, and I thoroughly enjoyed every one of them. I definitely recommend The Vampire Code and look forward to reading her sequel.

I thought it was a very good book and would love to see a sequel.

You have subscribed to alerts for E.C. Adams.

You have been added to E.C. Adams's favorite list.

You can also sign-up to receive email notifications whenever E.C. Adams releases a new book.