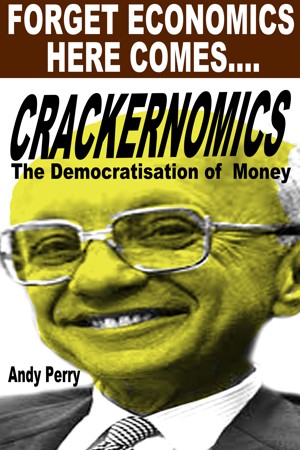 By Andy Perry
Rated 3.67/5 based on 3 reviews
Think you know what caused the Credit Crunch?

It was Crackernomics and the Democratisation of Money.
Find out why. More
Q: What could you have to say about the credit crunch that hasn’t already been said better by someone else?
A: It is certainly true that the Credit Crunch has generated billions of words, orthodox and radical, from mainstream professionals and a host of amateurs. It all adds up to ‘literary quantitive easing' (L.Q.E.) - and has about as much net positive effect. The Credit Crunch has rolled on its own merry way impervious to all previous attempts to predict where it will go next or remedy it. I don’t think it would be very hard to say something better or more original than that.
Q: What could you know that all the others don’t?
A: Facts on the crisis and its aftermath are available in abundance to anyone who cares to look. In fact, we are drowning under a tidal wave of statistics, facts and figures, none of which in themselves point to an obvious solution. It’s not about the quality or quantity of information- it’s about the way we interpret it .
Q: Well, what makes your interpretation different from all the rest?
A: First of all, I emphasise that the ongoing Credit Crunch debate is not an objective investigation into an ‘accidental’ economic collapse; it is part of a battle to establish who is to blame for the crisis, what punishments should be handed down and what policies if any, are needed to repair the damage.
How the available information is interpreted by any group or individual depends upon the stake that group or individual has in the outcome of this debate.
This is what used to be called ‘political economy’. However, 'political economy is no longer an acceptable framework for discussing events like the Credit Crunch in the western world. A new framework has emerged under the tutelage of the media, politicians and economists on both the so-called left and the so-called right. An appropriate name for this new framework is CRACKERNOMICS.
Download: epub mobi (Kindle) pdf more Online Reader
rtf lrf pdb txt
Price: Free! USD
Add to Library
Create Widget
Tags: money history politics pagan wwii sixties marxism capitalism economics friedman forecast liberalism credit crunch money collapse money beliefs sixties counterculture germanic money behavior economy recession growth money in poltics money poltics moneyfree democratic system money illusion money and wealth economy and recession economy breakdown money and barter money creation money making schemes money concepts money pit crackernomics democratisation monetarism

The Great Money Train Hi-jack
A little film I made to illustrate some aspects of the Democratisation of Money. The script of the film is in Crackernomics

Crackernomics
This sucker is going down!

Reviews of Crackernomics by Andy Perry

Okay, I've posted my review here on an earlier occasion. For some reason my review was removed. So I contacted the Smashwords support and asked for an explanation of why this happened, but I have received no answer. Maybe the author contacted the support and had my review removed. I honestly don't know what happened. Anyways, if the author is offended by my sometimes a bit harsh tone I can understand this, but on the other hand if one writes a book and use phrases like "personally repellent and a grotesque" about a single individual without substantiating the claim, one should expect a strong reaction from his readers.

If the author disagrees with the substance of my review I urge him to engage its content, instead of having the administrators on this community remove it. Censoring critical reviews is not a viable way of maintaining a constructive debate. If the author wishes to engage my arguments I would urge him to do it here, on his Youtube channel or on another form of media and I would be happy to engage him in a constructive debate about some of these issues.

Anyhow, here follows my original review of the book:
This book is mainly comprised of incoherent drivel and baseless assertions. Let us take some examples:

On page 29 the author goes in to a very weird argument, which starts by explaining how VHS won the battle against Betamax, even though the latter was technologically superior. This he argues was achieved by changing the grounds on which the battle was fought and thus we ended up with system which was inferior to the alternative.
He then goes on by using this VHS analogy to explain that free marketers changed ground in a similar way, because they knew they would otherwise loose the technical argument. He then concludes that “This is essentially what Monetarism or ‘Friedmanism’ is; an attempt to re-define economics in a way that avoids defeat.” - This we have to take at face value as the author has nothing but the VHS narrative to back this up, quite pathetic really.

On page 86 we find another entertaining piece called “Understanding Friedman”. The first paragraph is just some nonsensical story about how the devil did not take the form of a snake to promote educational opportunities in the Garden of Eden and thus by extension monetarism did not come into existence to defend liberalism.
The author then goes on to state that the goal for all monetarists was to spread the idea that inflation was an evil that should fought, and that the fight should take precedence over moral purpose. He attempts to back up this statement by providing a quote which states that the problems associated with the massive expansion of public expenditure and the inefficiencies of welfarism had diminished the appeal of planning - a quote which has nothing to do with inflation what so ever. The rant goes on and asserts that according to the monetarists, what ordinary people want causes inflation and therefore in the interests of efficiency, the public should not be allowed a say in public policy. This is of course a very dishonest misrepresentation of the monetarist stance. No monetarist has ever stated that the public shouldn’t have a say in public policy – this is just one of the authors own speculations, which he backs up with exactly nothing.
The monetarist stance is basically this: that rampant inflation does not benefit the public, as it erodes their savings away and creates uncertainty – if it is allowed to spin out of control, the public can end up loosing faith in the currency and ultimately reject it, which would in no way be good for society as a whole. Their argument was that expanding the money supply was inherently inflationary while contractions were deflationary. It therefore follows that too large an expansion of the money supply results in prices going up. A set of policies for fighting inflation were suggested by the monetarists and not all of these were a success, but eventually they managed to bring inflation under control.
The author could have chosen to write about these policies, why they were implemented, how they worked, what went wrong and what went well. But instead he chooses to engage in speculation over the motives that might have been behind Milton Friedman’s policy prescription.
Now the author comes up with this passage: “Friedman was clearly personally repellent and a grotesque. His trademark leering grin reveals just how twisted his inner psychology was. In a Germanic empire supposedly enthralled by his ideas, 99.9% of the public have no idea at all who
Milton Friedman even is.”
Here the author looses every last shred of credibility. The statement that Friedman was personally repellent and a grotesque is not substantiated in any way, and is nothing but a slander. The idea that one can say anything about a persons personally based on a grin is absurd on its face. And the reference to the Germanic empire made no sense at all.

On page 89 we find a piece that it is titled “Paradise lost”.
Here the author makes the assertion that the monetarist’s purpose was to adapt a philosophy of power to the emergent truth that Marx was right about the state. Basically the monetarists created a political movement whose purpose was to hijack the state to prevent it from falling into the hands of anyone but them. Of course this is completely contrary to recorded history, and seeing as the author fails to reference any sources for his observations, one has to conclude that he made the whole ting up.

In conclusion this book poorly written, incoherent, at times completely nonsensical, has almost no sources backing up any of its assertions and is highly speculative. What could have been an interesting book on the history of monetarist policies ends up being nothing but a very poorly researched conspiracy theory, consisting mostly of armchair logic. This book is nothing but one big non sequitur.

pancake says:
June 27, 2013 at 4:11 pm
In terms of hidden financial systems, Andy Perry, with his theory of the Democratisation of Money makes the case that the aim with derivatives is ultimately the issuance of new, non-governmental sovereign money (as a trumping by corporate power, of government power). It’s fascinating what he describes-I think. The new money’s essentially sovereign because the issuance/ownership of the derivatives is hidden behind such a vast and intricate web of corporate structure that’s it’s untouchable (I wonder if jurisdiction-ally, it’s even space based). The new money based on derivatives stand a chance of having value because the right placemen have ‘been in place’ to see to it that the ‘worthless’ derivatives have been/are being swapped 1:1 with government issued money (and so essentially have that as a foundation). Perry’s ebook (available as a free download) is called Crackernomics & is a good read.

At last a unique and forceful analysis of the "credit crunch" that isn't shrouded in the same old conspiracy theories! Perry identifies this economic crisis as a cultural development in the Western world ( or as he puts it, 'the Germanic Empire"). This is where I feel the book's power lies… Perry does not enter into the tired arguments of evil bankers and zionist maniacs creating some sort of lizard infested capitalist psychosis, he has a firmer grasp of the problem to rely on such desperate things. However, this is not to say the conclusions he draws up are any less frightening, in fact in some ways they are more so. I would recommend this book to anyone wanting real answers to a world we are seeing spiral out of control. This is not a flimsy BBC article which ends in the same confusion it started, this is close to the bone ..and it's free!

You have subscribed to alerts for Andy Perry.

You have been added to Andy Perry's favorite list.

You can also sign-up to receive email notifications whenever Andy Perry releases a new book.