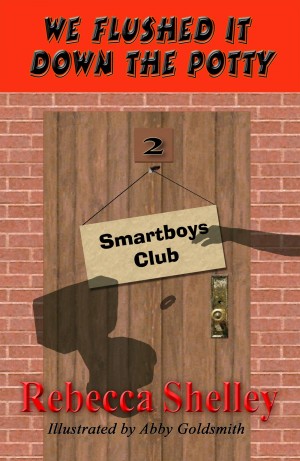 We Flushed it Down the Potty

She especially likes to write about fantasy creatures such as dragons and fairies.

Her children’s books are written under the Rebecca Shelley name.

Her thrillers and other books for adults are written under the R. L. Tyler pen name.

She also has two books out under the R. D. Henham pen name—Red Dragon Codex and Brass Dragon Codex.

Reviews of We Flushed it Down the Potty by Rebecca Shelley

In this one a bully name Bridget is out to get Vinny, calling her names and even flushing her ring down the toilet. Well no one treats one of the smart boys like that, off they plot how to stop Bridget and get the ring back. Art decides to solve the ring problem. Monkey first tries telling the teacher, but she doesn’t believe that one of her favorite students would do such a thing. Then off to the principal, but no she doesn’t believe him either. So Monkey comes up with some clever plans to spring on Bridget.
Bridget on the other is trying her hardest to demoralize Vinny and turn her friends against her.
This time the book deals with bulling and how Monkey solves it. I like what Art does at the end.

i like this book even better than the first one. they get into so much more trouble. you also get a better depth of the characters personalities.

(reviewed the day of purchase)
Adrieanne Gresh reviewed on Nov. 29, 2010

Fun and exciting as the characters deal with bullies in funny, almost problematic ways.

You have subscribed to Smashwords Alerts new release notifications for Rebecca Shelley.

You have been added to Rebecca Shelley's favorite list.

You can also sign-up to receive email notifications whenever Rebecca Shelley releases a new book.