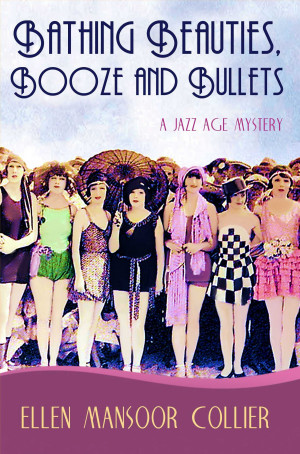 By Ellen Mansoor Collier
It’s 1927 in Galveston, TX—the "Sin City of the Southwest." Jazz Cross, a young society reporter, is assigned to profile bathing beauties competing in the Miss Universe contest, but she’d rather solve the murders of local prostitutes. Worse, she must fend off advances from Colin, a gangster she suspects is involved. Finally she risks it all to save her friends and brother from a ruthless killer. More
(Sequel to Flappers, Flasks and Foul Play) It’s 1927 in Galveston, Texas—the “Sin City of the Southwest.” Jasmine (“Jazz”) Cross is an ambitious 21-year-old society reporter for the Galveston Gazette who tries to be taken seriously by the good-old-boy staff, but the editors only assign her fluffy puff pieces, like writing profiles of bathing beauties. The last thing Jazz wants to do is compare make-up tips with ditzy dames competing in the Miss Universe contest, known as the “International Pageant of Pulchritude and Bathing Girl Revue.”

She’d rather help solve the murders of young prostitutes who turn up all over town, but city officials insist on burying the stories during Splash Day festivities. After Jazz gets to know the bathing beauties, she realizes there’s a lot more to them than just pretty faces and figures. Jazz becomes suspicious when she finds out the contest is also sponsored by the Maceos, aspiring Beach Gang leaders and co-owners of the Hollywood Dinner Club, where the girls will perform before the parade and pageant.

Worse, her half-brother Sammy Cook, owner of the Oasis, a speakeasy on a rival gang’s turf, asks her to call in a favor from handsome Prohibition Agent James Burton: He wants Agent Burton to raid the Hollywood Club during the bathing beauties dance routine--or risk revenge from the Downtown Gang leader. Her loyalties torn, Jazz is faced with an impossible task that could compromise both of their jobs and budding romance. Meanwhile, Jazz fends off advances from Colin Ferris, an attractive but dangerous gangster who threatens Sammy as well as Burton.

In the end, she must risk it all to save her friends from a violent killer hell-bent on revenge. Inspired by actual events.

Ellen Mansoor Collier is a Houston-based freelance magazine writer whose articles and essays have been published in several national magazines including: FAMILY CIRCLE, MODERN BRIDE, GLAMOUR, BIOGRAPHY, COSMOPOLITAN, COUNTRY ACCENTS, PLAYGIRL, etc. Several of her short stories have appeared in WOMAN'S WORLD. A flapper at heart, she’s the owner of MODERNEMILLIE on Etsy, specializing in Deco to retro vintage items. Formerly she's worked as a magazine editor, and in advertising and public relations. She graduated from the University of Texas at Austin with a degree in Magazine Journalism and was active in WICI, serving as President her senior year, as well as the campus magazine UTmost. During college, she worked as a cocktail waitress one summer, a short-lived experience. FLAPPERS, FLASKS AND FOUL PLAY is her first novel, followed by BATHING BEAUTIES, BOOZE AND BULLETS, GOLD DIGGERS, GAMBLERS AND GUNS and VAMPS, VILLAINS AND VAUDEVILLE, inspired by real-life rival gangs, historical events and Galveston landmarks.