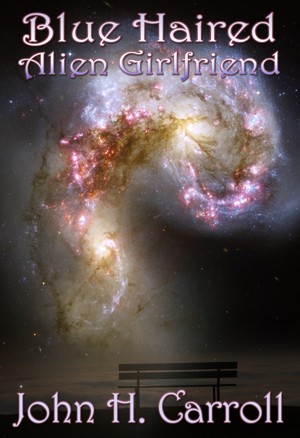 The people around Joshua feel that he's a bit odd and know very little about him. Each comes to their own snap judgments about him.

Sometimes love can be a little quirky, sometimes it can be a lot quirky.

More a vignette than an actual story, but a good short read nonetheless.

The boyfriend, Joshua, is a bit of a loner. He's an underachiever who works at a fast food joint -- and not a top of the line one at that. Not much of a spoiler, but he's a bit of an alien, himself.

Great story concept, excellent writing style, and wonderful character creation. I only had one issue with this book: the ending was much too abrupt, leaving me with a feeling that I didn't really know the end of the story.

I got this for free on Smashwords. Blue Haired Alien Girlfriend by John H. Carroll tells the story of a fast food employee who meets an alien girl. She's surprised because people aren't usually meant to see her, yet, for some reason he can. They talk to each other about their lives.

I kind of liked it, but it was a bit dull and the story didn't really lead anywhere interesting. I liked the premise of the story, but I just feel like not enough was explained. For that reason, I didn't particularly like any of the characters, but didn't particularly dislike them either. There just wasn't much to go on. As a story, I think it has all the intention of being memorable, but it's just not interesting enough to be that way.

This has the potential to become a very intriguing Sci Fi novel if the author is ever compelled to embellish on this tale of intergalactic love. The author's writing style is solid but the overall plot left many questions unanswered due to Mariella's lack of knowledge ie: why is Earth Forbidden? It would be great to see this story fleshed out a bit more. Well done, a great story!

A fun story, well worth a read on a lazy afternoon.

I was rooting for them and although I wanted more of their romance, the outcome left me satisfied. I am, though, very curious about Mariella and wondering if meeting Joshua changed her even more. Great little story about living in the moment.

the second Carroll I've read. again, same feeling, I will echo some of Hickory Cole's comments, certain sentences, lines should be pared down, but more skillful than most of the stuff on Smashwords. capture of a certain kind of sentiment the best point; some weak spots (a phrase here, a word choice there) do not otherwise mar a solid 4****

There were parts of Carroll's writing style I really enjoyed and parts I found to be a little too cheesy even though most of those instances he called out himself. I wasn't as sold on the story itself as much as all the other reviewers but I would definitely read more from this author.

I love it, and read it all.

This story was well written and captured the moment when a person finally sees the girl of his dreams. It shows the depth to which a person can sink before finding the true love of their life.
I was engrossed in the story the minute I picked it up, it draws you in and gives you a sense of the lostness of people today. I am amazed that John is not a well known and fantastically rich writer by now.

You have subscribed to alerts for John H. Carroll.

You have been added to John H. Carroll's favorite list.

You can also sign-up to receive email notifications whenever John H. Carroll releases a new book.