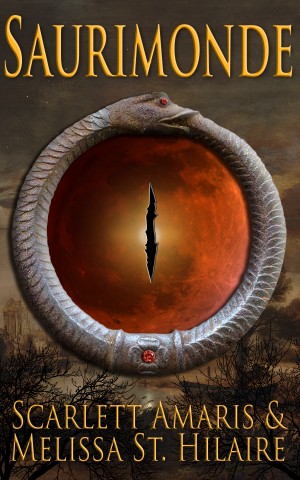 Welcome to a world of terrible and sensual beauty, full of treachery, lust, violence, betrayal and magic, where the day and night are two very different realms and nothing is as it seems. Welcome to the world of Saurimonde by Scarlett Amaris & Melissa St. Hilaire... Do you dare to go there? More
Like a bird in a gilded cage, Saurimonde is trapped between a brutally abusive husband, Gilles, who treats her like a possession, and a lover whose name she doesn't even know. The only thing she longs for is an escape. But to where? She should have been more careful in what she wished for because the day Gilles spies her and her lover together is her last mortal one. With the aid of the local wise woman, Elazki, Gilles gets his hands on a dangerous ancient potion. He figures out the perfect way to serve it to her – cooked into her lover's heart. One bite has dire consequences.

As the body count begins to rise in the village, Gilles starts to suspect his wife is still alive. He enlists the help of Elazki, who has secrets of her own, and her darkly handsome nephew, Sordel. Newly returned after being banished by his magus master in the black lands, Sordel unknowingly holds the key to all their fates. One will die, one will wish they were dead, and the other will fulfill their destiny.

Scarlett Amaris likes playing devil's advocate on the dark side of the moon. She spends a large amount of time tracking through ancient ruins and decoding old texts in the Pyrenees. Her more esoteric work can be found at www.shadowtheatre13.com and www.terraumbra13.blogspot.com. She's also co-written scripts for the anthology film The Theatre Bizarre, the documentary The Otherworld and the upcoming feature films, H.P. Lovecraft's The Colour Out of Space, Replace, and Black Gate. Saurimonde is her first novel and she's currently finishing up Hidden Montsegur before getting started on Demon Priest, her next erotic endeavor along with the next Saurimonde story. To read more, visit her blog: scarlett-amaris.blogspot.com.

Melissa St. Hilaire likes to bask in the center of chaos watching supernova explosions. She spends most of her time daydreaming, researching, and scribbling. She wrote film and music reviews for The Heights Inc. Her poetry has appeared in the periodicals Shards, The Outer Fringe, and The Laughing Medusa. She co-authored several scripts for Tone-East Productions. Her debut book, a memoir titled In The Now, was released in 2012. Her current projects include a sequel to Saurimonde, a follow-up to In the Now called Medicated, a fantasy series called Kaleidoscope Moon, and a sci-fi epic called Exodus. To read more, visit her website www.melissa2u.com.

You have subscribed to alerts for Amaris St. Hilaire.

You have been added to Amaris St. Hilaire's favorite list.

You can also sign-up to receive email notifications whenever Amaris St. Hilaire releases a new book.