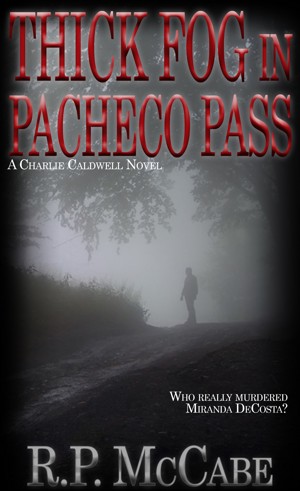 Charlie has come to Divina, the tiny central California town where he grew up, bent on confronting Miranda over the event that defined and destroyed every romantic relationship he has ever entertained.

Questions about Miranda’s unraveling life and violent murder gradually invade Charlie’s consciousness. Bits and pieces of seemingly insignificant information begin to nag at him causing him to question whether the man locked behind bars and charged with her murder is, in fact, the real killer.

Become enthralled while Charlie takes his first baby-steps toward reinventing himself, solves the question of who really murdered Miranda DeCosta and discovers another unforgettable woman who will reshape his life.

Author R.P. McCabe, with his debut novel Betrayed still garnering strong reviews and attention, offers his new novel, Thick Fog In Pacheco Pass. This is another edge-of-your-seat "whodunit" that will keep you guessing to the very end.

“Steve Jobs and I graduated from the same alma matter, though he was in the highest one percent of our class while I’ve struggled to remain in the middle of the pack!”

After a successful entrepreneurial career, Mr. McCabe turned his attention to writing during the late 1980s. During the 90s he was a featured writer for Enterprise Magazine. In 1998 he graduated from a two-year creative writing program with Long Ridge Writers Group.

R.P. McCabe's debut novel, Betrayed, is a contemporary suspense drama of tragedy and revenge based upon a real Ponzi scheme and its heartbreaking consequences for one couple.

You have subscribed to alerts for R.P. McCabe.

You have been added to R.P. McCabe's favorite list.

You can also sign-up to receive email notifications whenever R.P. McCabe releases a new book.