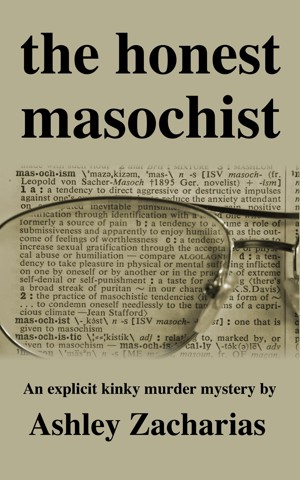 Rated 5.00/5 based on 1 reviews
Miranda is a new client who doesn't want psychological therapy from Justin; she wants him to satisfy her masochistic needs with plenty of kinky sex. Such a blatant violation of his ethics could spell the end of his marriage and his career, but he can't resist giving her what she wants. He enjoys more wild sex than he ever dreamed. Until her husband is murdered and he is her alibi.

Equal to or Better than Zacharias’s Previous Efforts.

First, let me tell you that I am an unashamed Ashley Zacharias fan. Her stories are always interesting and daring, with great kink, psychologically developed characters, and a clean direct writing style that makes fast and enjoyable reading.

Just as each implement of the story is defined to the degree needed to allow for a clear and complete understanding of the story, so is each character constructed with a degree of personality and psychological background as to allow the reader to empathize with them. This is what makes me such a Zacharias fan, her characters are so complex and well developed that not a single action seems unmotivated or unaccountable (I hate when a character does something that makes you want to scream at them in the middle of story.) Told in the third person we are given are given insight into the main characters’ by Justin, a practicing psychotherapist, who provides us with his point of view. He describes his interpretations and assumptions about the other characters' thoughts and emotions.

This book is largely a departure from Zacharias's earlier works, it is unique for two reasons, first it has a male point of view. Most of the author's prior stories have been narrated from the prospective of the masochist female. Secondly, this book is the first to utilize a character with psychological training. Even with this assistance Justin initially does not understand how to interact with the female lead Miranda, the eponymous "Honest Masochist." Motivated by a perceived need to protect a client from harm, we are able to see the world of the psychotherapist slide from profession concern to personal disaster. Justin provides an on going commentary about his life and those of the people around him complete with ironically unaware choices and self-delusion rationalizations.

This is a different type of novel by Zacharias but it better than her previous efforts. She continues to growth as an author in scope, style and skill.

I look eagerly forward to her next effort, as I am sure that you will after reading this novel.