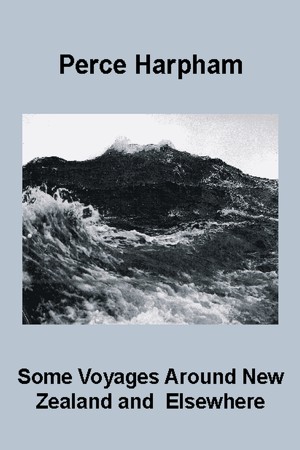 Some Voyages Around New Zealand & Elsewhere

By Perce Harpham
In over seventy years of sailing Perce has made many voyages around New Zealand, solo return across the Tasman Sea, to the South Pacific Islands and elsewhere. He weaves observations about people, places, boats and the sea into an unusually acute feeling for the fascination of cruising in small boats.In his time GPS, chartplotters,autopilots and roller furling have revolutionised cruising. More
This book was Perce's gift to his grandchildren for his eightieth birthday.

Following his boyhood dreaming he describes his many voyages around New Zealand, to the islands of the South Pacific, solo return across the Tasman Sea and elsewhere. His observations about people, places, boats and the sea convey to the reader an unusually acute understanding of of the fascination of cruising in small boats.

Starting from days and nights cruising on the Tauranga harbour in a 10 foot sailing dinghy Perce progresses through seventy years of increasing sophistication in cruising. Centuries old methods of navigation have been replaced by GPS and Chartplotters. Rigs have changed from mostly gaff rigged to almost entirely Bermudan. Roller furling has come of age for both jibs and mainsails. Autopilots have been nearly perfected.

So it is that age is much less of a barrier to continued cruising. Perce says that he is older, slower, weaker and more stupid (a few people believe him) but he can still sail.

Born in 1932 in New Zealand Perce graduated with degrees in Chemical Engineering and Mathematics (M.Sc)then worked for Imperial Chemical Industries (ICI) for 14 years. He was moved to the United Kingdom and then Australia as Operations Research Officer. He returned to New Zealand to progress through Production Manager at Lower Hutt for Dulux Paints Ltd and then Management Services Manager responsible for the fourth computer to be installed in New Zealand. He had made his first contact with computers in 1957 while in the UK.

Perce started the first computer software company (Progeni) in NZ in 1968. Progeni prospered and Perce setup subsidiaries in Australia, the USA and China. Following the financial crash of 1987 Progeni, in 1989, was "collateral damage" in the failure of the Bank of New Zealand. See his website https://perce.harpham.nz for "Progeni - Success and Failure".

Perce started again with some success, qualified as a Mediator & Arbitrator and devoted more time to his family and grandchildren, sailing and other pursuits. These include an interest in politics and acting as an arbitrator and mediator. He enjoys cruising in yachts.

Perce's wife, Myra, also once had a high public profile as co-director of New Zealand's Commission for the Future. They have been married for 64 years. They have 3 children, 8 grandchildren and 1 great grandson.

You have subscribed to alerts for Perce Harpham.

You have been added to Perce Harpham's favorite list.

You can also sign-up to receive email notifications whenever Perce Harpham releases a new book.