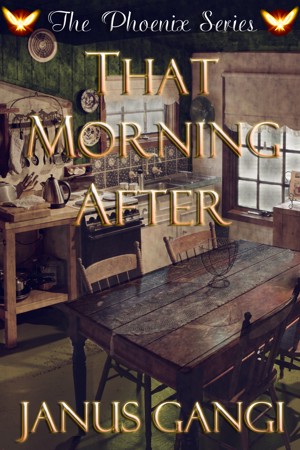 That Morning After from the Phoenix Series

By Janus Gangi
Rated 4.69/5 based on 13 reviews
Nicky has a choice, to continue to let the world use her as a punching bag, or to put on her boxing gloves and give Fate the one two punch. Which would you chose? More
Life was not always kind to Nicky. Raised by a cold mother and a mostly-absent father, she 'escaped' into an abusive marriage from which freedom was not an option. When Fate twists her life's thread again and leaves her without even the marginal protection of married life, she must make it on her own for the first time. An online dating service promises to ease her loneliness, but Nicky gets something she was never expecting ... now she must decide if she's brave enough to give Fate the one-two punch she'd been handed all her life.
Available ebook formats: epub mobi pdf rtf lrf pdb txt html
First 20% Sample: epub mobi (Kindle) lrf more Online Reader
pdb
Price: $3.99 USD
Buy Add to Library Give as a Gift
How gifting works
Create Widget
Tags: new beginnings overcoming lifes difficulties urban fiction suspense urban paranormal suspense suspense and thrillers dating on the net suspensesupernatural
About Janus Gangi

Janus Gangi is a native New Yorker and Native American, in which blood has always been a part of her life. After graduating from Flushing High School, where she majored in music, she was a professional singer/songwriter for a short while. She then went on to medical school and became a Hematology Technologist. She worked for a major non-profit organization, where she was involved in distributing the latest AIDS research information to the top doctors in the United States. She then attended Bible School for six years and went on to be ordained and founded a ministry in New York City. In the early nineties, she moved to East Tennessee where she returned to her roots in the Pagan tradition and went back to school. She now holds degrees in Religious Studies and Psychology in addition to her previous ones. She is an avid amateur Egyptologist, and now enjoys her new found love, writing

I liked this book. Keep up the good work.

Janus does it again! That Morning After is a short(ish) story about Nicky, a woman recovering from her past, including divorce, and decides to try online dating sites…with some consequences!
This is a well-balanced read and the author delves into the mind of her main character with great skill and finesse. We, the readers, quickly identify and desire to find out what comes next….the mark of a really good narrative, in my opinion.
Weaved in is the reality of city life, the dangers of online dating, the smell of books in a bookshop, the sun and colours of Italy, the change that comes after mortality is left behind…oooh, you have to read it!
That Morning After is a vampire story with a difference, folks, and well worth it. There are so much of them vamp tales out there, that it’s hard to stand out, but Janus Gangi concentrates of emotions and situations and people and their problems until it becomes a vamp tale with real depth. And it’s short enough to entice you, while being long enough to satisfy you!
Loved it! And will definitely read the next instalment!

(reviewed the day of purchase)
Taabia Dupree reviewed on June 5, 2013

This story surprised me. I'm rarely surprised. I didn't know whether to cheer for her *the main character Nicky* or shake her. I didn't want to feel sorry for her sometimes, but I did. I yelled at her and asked her was she crazy!?!

Do you know what the three F's are when someone panics? They are freeze, flight, and fight.

Writer Janus Gangi nailed them in this story!

That's what you call good writing. She had me invest in the character and I had to finish the story just to see what happened next.

Read the book, it's a good one! I'm looking forward to book 2.

"That Morning After" was an interesting book and I enjoyed it. You know you are really getting into the story when you feel sorry for the main character, Nicky, and hope the steps she is taking (college, new friends, job) really give her a second chance in life.

When Nicky gets involved with a guy on an online dating site, and starts having strange, scary experiences after she tries to break the relationship, you think something bad is going to happen. It does, sort of, but the experience could also be considered good for Nicky. You have to read the book yourself and decide what you think.

That Morning After is a cautionary tale, one of a woman whose entire life has been subject to the vagaries of fate: a dysfunctional family, an abusive marriage, self-esteem more noted by its absence, and a deep, abiding sense of loneliness even when the main character, Vickie, decides to take a modicum of control over her life.
The problem with taking control is that the choices one makes are often crucial. Without the background, or that all too important matter of self-esteem and positive experiences, history can and does repeat itself.
Vickie takes a chance on online dating services and finds a measure of self-actualization in the mild banter and flirting. It also leads to some obsessive-compulsive behaviors and unrealistic expectations. And it leads directly to a predator, though not the kind one would normally expect under such circumstances.
Vicky is skillfully manipulated into believing her ‘suitor’ might have amorous feelings for her, and even though her trust-meter is clanging off the wall, she does the unthinkable: she agrees to a meeting.
And not just lunch and a quick escape to a cab if it all goes south. Instead she meets the elusive suitor at his villa, and… as they say, things don’t go as planned.
What emerges is a new Vickie, some might say ‘improved’, but then that’s really a matter of perspective. What it does is set her on a whole new path and ‘that morning after’ is really just ‘that morning before’.
Criticisms: the narrative was heavily laden with Vicky’s POV, in a stream of consciousness that really called out for narrative interludes to relieve the unrelenting strains of woe-is-me (and yes, she had plenty of reasons for that ‘woe’) that resembled a ‘list’ rather than a compelling story. There were some ‘editing challenges’ (typos, missing words, odd tense changes).
That being said, there’s enough here to hold the reader’s attention, and certainly enough to garner sympathy for Vicky (and avoid the death knell of the ‘too dumb to live’ heroine).
The story ends at the beginning, and if you read the book, you will understand why.
This is a nice effort and has promise for the next installment. 4 stars

(reviewed 19 days after purchase)
Lori Safranek reviewed on May 29, 2013
(no rating)
Anyone who comes to the end of That Morning After and isn't surprised, must be a psychic. Janus Gangi has woven a contemporary story with shades of old-fashioned love. Vicki goes from feeling like a failure at love to being eagerly sought by the mysterious Phoenix. Can the timid, down-hearted Vicki pick herself up and survive the adventure of a lifetime?

This is a great read, and I think a lot of women will relate to the difficulties of romance in the computer age of facebook and Match.com. Vicki's a great character and I highly recommend this book.

The author provided this book to me for review purposes.

What do you do when Life insists on dealing you a rotten hand? Do you go under, or fight back? Nicky fights back, despite her traumatic past. But you just know it's all going to go wrong again when she realizes she's being stalked on an online dating site. Knowing how dangerous it could be, she finally agrees to meet the guy, little suspecting how drastically her life will change once more. I certainly didn't anticipate the way this novella ends!
That Morning After is full of emotion and tension, and Nicky is one tough woman. A great read!

(reviewed 16 days after purchase)
Victoria Harvey reviewed on May 26, 2013

That Morning After is a thrilling ride through the psyche; insecurity, paranoia, fear, ecstasy, terror, empowerment and self discovery, it’s all there and more. Don’t get me wrong, this isn’t a feel good chicken soup for the soul kind of book but you will want to come back for more. When it ends you will be looking for more pages, you will be eagerly awaiting the next chapter. I want more of this story Janus, bring it on!

(reviewed 4 days after purchase)
John Cassian reviewed on May 25, 2013

(reviewed the day of purchase)
Megan Peters reviewed on May 19, 2013

A wonderful glimpse into a modern take on vampires with racy, laugh-out-loud dialogue and memorable characters. I could not put this book down, and gulped it up from start to finish! There MUST be more in store for the sassy heroine - and if there is, I can't WAIT to read it!

You have subscribed to Smashwords Alerts new release notifications for Janus Gangi.

You have been added to Janus Gangi's favorite list.

You can also sign-up to receive email notifications whenever Janus Gangi releases a new book.