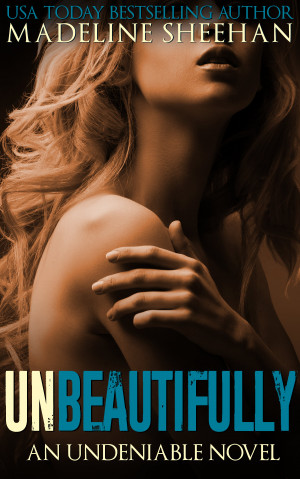 Danielle “Danny” West is the daughter of Deuce West, President of the Hell’s Horsemen Motorcycle Club. A sweet and beautiful girl, she loses her way, searching for things that are always out of her reach. Erik “Ripper” Jacobs is the Sergeant at Arms in the Hell’s Horsemen. Once a man who always had a smile on his face, his life takes a turn for the worst when a tragedy befalls him, leaving him scarred and broken. During a midsummer night, Danny and Ripper’s paths cross, forever changing their lives. Hastily, their lust turns to love until another tragedy forces them apart. On a journey that is marred with ugliness and chaos, Danny and Ripper must discover if their unforeseen connection can find the beauty in their world.

This is Danny and Ripper’s story.

Everything has beauty. Even the ugly. Especially the ugly.
Because without ugly, there would be no beauty.

Fantastical realm dweller Madeline Sheehan is the USA Today bestselling author of the Undeniable series and Shut Up and Kiss Me. More of her published works include: The Holy Trinity series, and the Thicker Than Blood series (Thicker Than Blood and Beneath Blood and Bone).

A Social Distortion enthusiast, and fan of anything deemed socially inappropriate, Madeline was homegrown in New York, where she can still be found engaging in food fights and video game marathons with her husband and son.

Great follow up to Undeniable. I really liked Undeniable but it was heart wrenching and stomach turning in its intensity. I really loved this book. Loved the storyline and characters. It had angst but not the stomach hurting kind. Great addition and can't wait to read more. Great steam and emotion. Couldn't wait to write to review- highly recommend reading!

Loved it!!! Couldn't put down. Can't wait for Cages story.

AMAZING! Thank you Madeline Sheehan for sending me on a skydiving trip of emotions. Undeniable and Unbeautifully are in my heart forever!

Amazing! Heart wrenching! Disgusting at times, which is fine, they're rough guys after all... I adore Madeline's books and this one did not disappoint. Can't wait for Cage's story!

I loved this book. It was as good as the first in the series, I could not put it down. The author made me believe that I was a part of the story, watching it happening. I will buy all of her books, she has hooked me.

Madeline did not disappoint with the second installment of the adventures of the Hell's Horsemen MC. I really loved how the first person writing from Danny's perspective mixed so well with the third person perspective writing that helped tell the story of the members of the club and characters from the first book and melded it together with Danny and Ripper's story. LOVED this BOOK!!! Love the twisted mind of Madeline Sheehan. Gritty, Exciting, & a Must Read if you dare!!!!!!

After reading Undeniable, I was certain of what to expect with Unbeautifully. I thought I would get a similar story as Undeniable with two different characters. Boy was I wrong!

First off, I was excited to read on and learn that this was not the sole story of two people in love, ergo Danny & Ripper, but it actually continued on the story of Deuce & Eva from Undeniable. Their story was told without sugar coating, in a naked and grueling way; the way I would expect it to be in real life. It was not a candy and roses story, but full of sorrow, heartache, and pain. The story of Deuce and Eva was important to fully understand the story of Danny and Ripper. It blended well and still managed to shock me, catch me off guard, and throw me around like a bitch at an MC club!

Unbeautifully was told in 4 points of view, Ripper, Danny, Eva, & Deuce. Madeline Sheehan is one crazy woman to try it, but she succeeded. The different POVs added to the story, created a better understanding, and allowed me to feel each and every character; to build an understanding with them, hurt with them, feel with them. It was pretty fucking awesome!

In the end, you have a great story of two relationships and see how crazy Frankie did a number on so many people. He physically scarred Ripper, but psychologically scarred Eva and Deuce, ultimately having an effect on Danny. I will definitely read this book again and cannot wait for the next story in this series.

“I don’t believe in fate. I firmly believe that life is what you make of it, that life will react to your actions, and that your final destination has nothing to do with the choices you make along the way. With one exception. Love. There are no rules when it comes to love.”

“…Everything has beauty. Even the ugly. Especially the ugly. Because without the ugly, there would be no beauty.”

And my favorite quote:

“Cox!” Kami screamed, stalking into the room. “Shut your stupid Mexican mouth!”
Cox glared at her. “Bitch, I’m Puerto Rican!”
“Whatever. Don’t you have some lawns to mow?”
I’m Puerto fuckin’ Rican!”

This book is an excellent addition to the series. I love, love Madeline Sheehan!! Her characters are rough and raw but so real at the same time! Can't wait for the next one!!

This book was amazing! I did not think I would love it more than Undeniable but I was wrong so wrong! If you you a gritty rip your heart out love story here you go!

You have subscribed to alerts for Madeline Sheehan.

You have been added to Madeline Sheehan's favorite list.

You can also sign-up to receive email notifications whenever Madeline Sheehan releases a new book.