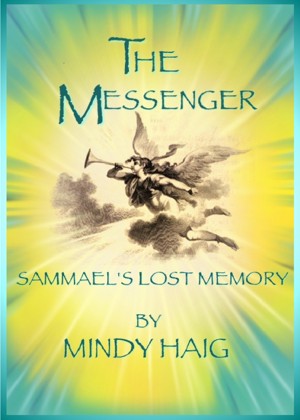 By Mindy Haig
Rated 4.75/5 based on 4 reviews
In the time between lifetimes, a familiar message made it's way to my ear. The need to know if this was the work of my father's hand goaded me to leave the safety of my hiding place. My burning desire to thwart my father's will compelled me to come and hear The Messenger.

I never should have taken his bait. More
Seventeen years was not enough time for my immortal soul to forget the stench of war. My next life had already begun but while it was still in it's infancy, again I heard the message my father plied upon the mortals. Again words of peace and love and brotherhood reached my bitter ears.

Again I was compelled to meet The Messenger.

The year was 1962. The place was Albany, Georgia. I told myself I would not be drawn into this mission. I only wished to see if this was my father's hand at work. What I found was a chance to redeem myself to one I'd wronged many ages ago; the only soul I'd ever met in more than one lifetime. And I embraced that chance. That small redemption meant so much that I even agreed to uphold The Messenger. But there is no limit to the cruelty of my existence.

I am a graduate of Rutgers University in New Brunswick New Jersey. I was born and raised in New Jersey so I am very much a city slicker. I moved to Florida to marry my sweetheart after college and marveled at how little there was to do and how much one had to drive to do it! But due to a job change and an abrupt move, we settled in Austin, Texas where the mottos is 'Keep Austin Weird' and I try my best to uphold it!
I am the mother of 2 great kids and though writing has always been a pursuit I was interested in, being a Mommy got in the way for quite a few years. I decided I would give it a fair shake in 2009 and I haven't been able to quit since. I have 4 completed novels and I have 4 additional started novels plus 2 sequels all in various stages of gestation. I have a hard time stopping my ideas and when a seemingly great idea hits me - typically just as I am attempting to fall asleep - I am compelled to start an outline.
My 2 great talents are:
1. My remarkable ablilty to remember names - which has served me well.
2. My ability to remember lyrics from every song I ever heard in the 70's and 80's - which has not helped me in the slightest.
I have a quirky sense of humor and sometimes TV commercials crack me up.
I like the notion of things being 'meant to be' or somehow touched by the unexplainable. I also like the effect music has on one's state of mind and the memories a song can recall.

About the Series: The Last Son of Glory

Also in Series: The Last Son of Glory

Reviews of The Messenger by Mindy Haig

As a fan of the mythology that has grown around the Judeo-Christian religions, I was quite interested to see what Haig would do with the character of Sammael, who is, in my opinion, one of the more fascinating characters of Biblical lore. And although this short story is but a taste of the full story, I have to admit that the taste has made me crave more about this world that Haig's created around a well-known character.

The time period this story is set in will immediately be familiar to most readers. One can almost hear the Southern drawl coming out of the characters' dialogue as they make their way through these few pages.

But what is most interesting all lies within the character of Sammael and the cryptic hints we are given to the greater story at hand, a story that I can't help but feel is one of ever-lasting unrequited love.

The tragic nature of Sammael, a child of God who was cast out for being imperfect, is enough to pull us into wanting to know more about his history on this planet, but Haig manages to create even more intrigue behind the figure through subtle hints at a greater history, and a constant internal battle between good and evil.

I'm eager to read more about this life Haig has created for the so-called Angel of Death in her full-length novel Glory!

(review of free book)
Ro Bo reviewed on June 28, 2013
(no rating)
It made my day! Very well written. I enjoyed how Sammael, a heavenly being, deals with similar struggles as mortals. I really enjoyed it!

I was pleasantly surprised by this. The Christian tag had me wary, but this is a strong love story that speaks of the nature of man.

This is such an exceptional read! The Messenger is the second book by Haig that that I have read. The first, The Wishing Place, was wonderful, but this... touching, stunning, well plotted and heart moving! The first thing you need to know is that The Messenger takes place in the 1960's when Martin Luther King Jr. is speaking to the masses, and the story revolves around these events.

Haig has both touched my heart and spurred my mind. She has clearly done her research on Sammael and I see this as a very real interpretation of what he could be like. The Messenger is a strong stand-alone Christian Fiction work, and it makes me anxious for the work that will follow it, Glory, when it is released next month!

If you like Christian books and have in interest in MLK, pick this up today!

Oh and, before reading the book I would go to Wikipedia and search Sammael to get some idea of the character before heading in. I can't suggest this book enough.

You have subscribed to alerts for Mindy Haig.

You have been added to Mindy Haig's favorite list.

You can also sign-up to receive email notifications whenever Mindy Haig releases a new book.