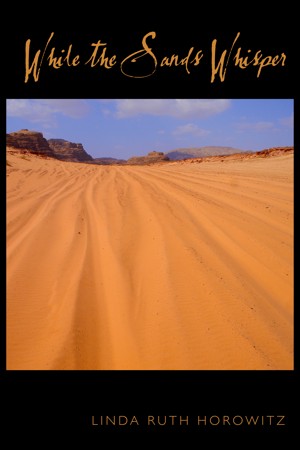 While the Sands Whisper

By Linda Ruth Horowitz
Ayishah, a freelance American-Israeli photographer, embarks on a seven-month adventure that soon draws her into a taboo love affair with her Bedouin guide, Hakim. He has many secrets, but Ayishah has one of her own: a painful abandonment of her family that needs to heal. It becomes her challenge to reveal, using the terrible beauty of the Sinai, how we overcome the borders that divide us. More
Having received a government grant to photograph the Sinai Bedouin, Ayishah, a freelance American-Israeli documentary photographer, embarks on a captivating seven-month adventure.

From her mafia-influenced childhood to her globetrotting photography career, Ayishah is no stranger to mischief. And when she meets her Bedouin guide Hakim, her attraction to his roguish charisma draws them into a taboo love affair. She is thirty years his elder, but their age difference means little in a rugged landscape hiding so many secrets.

In an impoverished Sinai, Hakim is led to deal in opium and human trafficking to Israel’s frontier, poor victims targeted for prostitution by a Russian crime syndicate. When Ayishah befriends two of these women, she becomes determined to understand the powers compelling Hakim to such crimes.

But Ayishah’s own secret lies hidden behind her camera: a painful abandonment of her family that needs to heal. It becomes her challenge to reveal, using the terrible beauty of the Sinai mountains and its people, how we can overcome the borders that divide us.

Born and raised in USA, at seventeen she emigrated to Israel where she lived for twenty-one years, and studied at the Tel Hai Art Academy. iLR Horowitz later emigrated to Denmark, continuing her studies in painting and sculpture at the Århus Art Academy. During a later three year music journey through Africa, she turned to photography.

Throughout her twenty-five year career, she freelanced as a self-taught photographer and photo-journalist, publishing innumerable stories and photo material for Scandinavian and international medias.

Linda has exhibited her photography and books at Scandinavian, European and American museums. She has also produced a photographic documentary book; titled 'Among Danish Jews,' 1996, published by Fotografisk Center, Copenhagen, Denmark.

Her newly-released novel, 'While the Sands Whisper,' is the result of a ten year work in process.

You have subscribed to alerts for Linda Ruth Horowitz.

You have been added to Linda Ruth Horowitz's favorite list.

You can also sign-up to receive email notifications whenever Linda Ruth Horowitz releases a new book.