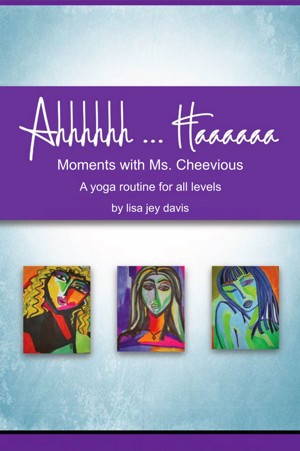 By Lisa Jey Davis
This book that you "do" more than you "read" will help you relax while conquering the world... Take some time for yourself with the help of Ms. Cheevious, and be guided through an as-challenging-as-you-want-it yoga practice. Taken from a combination of Iyengar and Ashtanga practices, Lisa Jey Davis (a.k.a. Ms. Cheevious) leads you through a yoga routine that will refresh and rejuvenate you!
Available ebook formats: epub
Price: $3.99 USD
Buy Add to Library Give as a Gift
How gifting works
Create Widget
Tags: fitness exercise health yoga
About Lisa Jey Davis

Lisa Jey Davis is an author and the founder and principal of Jey Associates Marketing & PR, in Los Angeles, California. A women’s health and fitness advocate, Lisa Jey is an award- winning writer, Huffington Post and Livestrong.com contributor and the author of "Ahhhhhh ... Haaaaaa Moments with Ms. Cheevious” (a yoga routine in an eBook). She is also a certified Pilates Instructor, Lagree Method Certified trainer, and a Yoga instructor.

Lisa Jey's latest, and much anticipated book "Ms. Cheevious in Hollywood" (due 2014) won Best Unpublished Manuscript at the New York Book Festival in 2007* and details with hilarity her post-divorce years navigating single parent life while pursuing a career in the entertainment industry. The book became the premise for her weekly blog/magazine Ms. Cheevious—Bringing Mischief to the Masses (www.mscheevious.com). The “Ms. Cheevious” blog along with various social media profiles (YouTube, Twitter, Tumblr and Facebook) sparked a widespread movement of supporters who follow the hilarious, indelible antics of a single woman and mother in Los Angeles, living her dreams on her terms, and despite the odds.

Prior to establishing Jey Associates, Lisa Jey worked in the world of entertainment television, managing show talent (Gwen Stefani, Sting, Sheryl Crow, Nellie Furtado, Dave Mathews Band, Stevie Wonder and more) for music based one-hour specials on networks like MTV, VH-1, CBS, (some specials of note: the NFL Super Bowl Bash, A Motown Christmas, MTV Movie Awards, ICON, Rock the Vote and many others). She continues to handle publicity for high-profile clients and events, produce television and new media, and book talent on select projects as time permits, and when she isn’t shaping the booties of the masses in her hard-core Pilates classes.

Lisa Jey has written for publications and organizations such as The Associated Press, The New York Review, Aspen Sojourner Magazine, Mountain Parent, The Huffington Post and Livestrong.com (among many others). She has written television news and radio segments, as well as scripts for televised entertainment industry events.

Lisa Jey has spoken to thousands at conferences, shared her personal stories and hilarious anecdotes, and offered relationship advice and brutally honest truth to men and women about the opposite sex. A dating and relationship aficionado, she speaks candidly and humorously about it, as well as her life as a contented single. Her personal YouTube channel, “Enjoy Every Day With Lisa Jey” showcases her Thought for the Day segments (inspiring empowering thoughts), and her “Ms. Cheevious” channel offers comic sketches and commentary with special guests.

In 2011, Lisa Jey Davis was diagnosed with the BRCA2 Genetic Mutation for Breast and Ovarian Cancer. Her sister’s seven-year battle with ovarian cancer (which took her life) was all the reason Lisa needed to take the most drastic approach to medical wellness: that of a prophylactic double mastectomy and breast reconstruction, as well as an oophorectomy (removal of her ovaries and tubes). She has since worked to raise awareness about genetic screenings and breast and ovarian cancer. Lisa is one of the go-to BRCA/Breast and Ovarian Cancer authorities called upon by the CW in Los Angeles (KTLA) for related news stories. She has appeared on the hit television show “The Doctors,” as well as on KTLA in Los Angeles on more than one occasion, and on various other media outlets to tell her story. She’s been quoted in regional print publications, newspapers, magazines and more.

Lisa Jey has another book forthcoming, now titled "Getting Over Your Ovaries: How to Make 'The Change of Life' Your BITCH." It is a witty survival guide for women dealing with hormonal issues and their own life changes, or those on the sidelines witnessing it firsthand and maybe suffering as a result. Her life’s goal is to encourage others to be proactive in their health care and maintenance, and to learn effective, practical ways to live longer and healthier, and “enjoy every moment” in the process.

You have subscribed to alerts for Lisa Jey Davis.

You have been added to Lisa Jey Davis's favorite list.

You can also sign-up to receive email notifications whenever Lisa Jey Davis releases a new book.