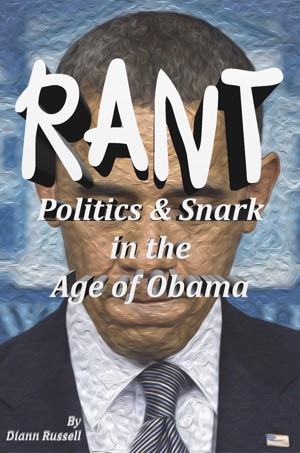 RANT: Politics & Snark in the Age of Obama

By Diann Russell
Insightful, snarky, not to mention hilarious, RANT by Diann Russell takes aim at politics in the Age of Obama -- from the Royal Family (AKA The Obamas) to the first cartoon character ever to occupy the office of Vice President. From Gun Control to Gay Marriage. From Immigration Reform to Hollywood. Prepare to be entertained, frustrated, and inspired. RANT is a powerful, often hysterical read. More
In RANT, Diann Russell opens up with both barrels on Politics in the Age of Obama (both barrels, just like Joe Biden says we should!)

Or Satan is Barack Obama.

Or, Barack Obama is a Moroccan actor.

I’m still not straight on it.

It’s a devilish knot to untie.

I mean, I know Obama thinks he’s royalty, but I doubt he had 'Prince of Darkness' in mind."

On Joe Biden:
"Every time he opens his mouth, another unbelievably moronic statement rears its head like the creature from John Hurt’s belly in Alien. Meanwhile, we all stand there dumbfounded like Veronica Cartwright muttering, 'Oh, God. Oh, God!'”

On an NBA Player Coming out of the Closet:
"A basketball player named Jason Collins has 'come out of the closet' as a homosexual.
Hollywood, the Enslaved Press and Bill Clinton as tickled pink.

Sorry. Was that hate speech? Should I say differently tickled?

Meanwhile, across the fruited plain [again, I’m sorry. That was probably insensitive], the ninety million Americans without work expressed their delight at the news.

Fact is, outside of Hollywood, the Enslaved Press and rapist Bill Clinton, nobody gives a damn."

On Gun Control
"Liberals take to the fainting couches at the very thought of gun owners.

'It is so tragic to see that these people do not mind the slaughter of children!!!'

Of course we do. That’s why we oppose abortion. And we don’t want to ban uterine curettes; or require universal background checks for the use of the cannula. We want to stop the killing of babies through the procedure of abortion. We want to make all medical facilities abortion free zones.

But, we will permit guns on the premises."

On Nancy Pelosi:
"I don’t foresee Nancy Pelosi calling it quits. Retirement isn’t in her future. She’s fixing to die right there where she’s planted herself.

And given the amount of botulinum toxin swimming laps in her veins, she may very well be impervious to natural death.

Holy water. A wooden stake. Maybe a large enough crucifix may get the job done."

On Liberal Democrats:
"Democrats are like arsonists who douse a home with gallons of gas, set it on fire, then blame the firemen for not being able to put it out in time to save it.

If Democrats were a fringe party in Washington with the blinding strength of a 15 watt bulb, perhaps we could all stand around and say, 'aren’t they cute the way they act like children?'

But the children are in charge.

And when Democrats are in charge, people die."

On Hollywood Celebrities:
"Celebrities travel in a tiny universe in which their every action, every sigh, every bodily function, is applauded and praised. They are an even more closed society than Japan in the nineteenth century. This echo-chamber known as Hollywood functions under the illusion that they matter. And because of this, they have the misguided notion that We the People should agree with whatever 'cause' they espouse – that their opinions have more weight and more purpose, because, well, they’re celebrities.
Never in the history of humankind has one tiny segment of our society thought so highly of itself."
Available ebook formats: epub mobi pdf rtf lrf pdb txt html
First 20% Sample: epub mobi (Kindle) lrf more Online Reader
pdb
Price: $0.99 USD
Buy Add to Library Give as a Gift
How gifting works
Create Widget
Tags: politics obama conservatism liberalism biden satire and politics
About Diann Russell

Diann Russell holds an MFA in Playwriting from Carnegie Mellon School of Drama. She is the owner of the conservative website PatriotRetort.com. Diann's agitprop Photoshop images have appeared not only at PatriotRetort.com, but also American Thinker and National Review Online. She lives in Central New York with her pitbull Mary of Bethany, her cat Willow, and her Mossberg 12g.

Reviews of RANT: Politics & Snark in the Age of Obama by Diann Russell

You have subscribed to Smashwords Alerts new release notifications for Diann Russell.

You have been added to Diann Russell's favorite list.

You can also sign-up to receive email notifications whenever Diann Russell releases a new book.