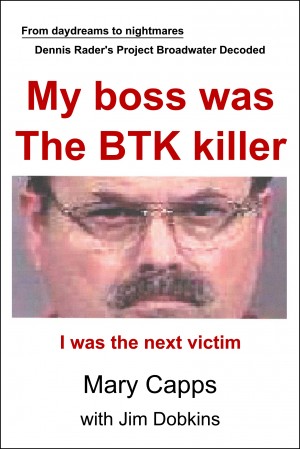 My boss was the BTK killer

Mary Capps wrote her book, My boss was the BTK killer, with Jim Dobkins. She worked for Dennis Rader, the notorious BTK (Bind Torture Kill) serial killer right up until the week of his arrest and exposure as BTK.

Here's how Mary described her life two years after her boss was arrested, and many months after she realized that her boss had planned to kill her, too:

As I write this I am about to go out riding on Harleys with Jim Mies, my fiancé.

My sense of humor is back. In fact, I’m smiling right now, thinking of a comment a friend made just yesterday.

Do you know what they call people that ride motorcycles at your age?

I love the feel of the wind blowing my hair, and the awesome power of the Harley beneath me. It’s just an experience you have to have to fully appreciate what I’m saying.

One habit that virtually disappeared while I was working for Park City is back:

Once again I’m stopping to smell the roses.

I see animal shapes in the clouds, and I daydream.
I’ve been spending time with my grandchildren, who were 7, 6, and 3 when I wrote this postscript.

One day before the weather got colder I was sitting outside watching my two oldest grandchildren playing with the herd of neighborhood children.

I smiled and couldn’t stop smiling as memories flooded back of all the happy, fun times I enjoyed as a child.

At the begging request of my granddaughter I passed out Popsicles to the neighborhood kids, and as I looked into the dirty faces of these children, at how very happy they were doing the same things we did as children—they didn’t have their GameBoys with them; no, they had their bicycles, dolls, trucks, and were climbing trees—I began to wonder:

Do things really come full circle, and will my grandchildren remember these times as fondly as I do my childhood?

Reviews of My boss was the BTK killer by Mary Capps

You have subscribed to alerts for Mary Capps.

You have been added to Mary Capps's favorite list.

You can also sign-up to receive email notifications whenever Mary Capps releases a new book.