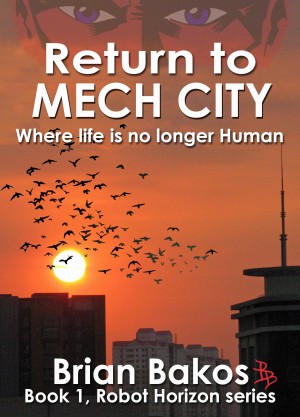 By Brian Bakos
Rated 4.80/5 based on 10 reviews
The end of the world as you've never seen it before. Life goes on in Mech City, but it is no longer human.

Oppose the Roboto Fascist regime at your peril!

Book 1, Robot Horizon series. More
The end of the world as you've never seen it before. Life goes on in Mech City, but it is no longer human. Oppose the Roboto Fascist regime at your peril! When mankind, in its folly, exits the world stage, only a single scholar robot remains to carry on the human cultural tradition.Can he do this in the face of a terrifying new robotic political order? Will true love somehow be rediscovered in all the mayhem?

I like to write and travel. I'm from the Detroit area originally and try to see other places as often as possible. My most recent travels have been to China, Ecuador, and Belize. Am thinking of my next destination. It's wonderful how travel inspires the writing process. Attended Michigan State University and Alma College.

Not much more than that. Anything else I have to say comes out in my books. If you really want to know more, please contact me through my website, https://www.theb2.net/. May life bring you many blessings! 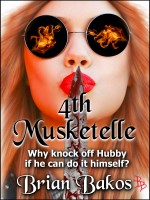 Reviews of Return to Mech City by Brian Bakos

Return to Mech City by Brian Bakos gets my vote as the best free read at Smashwords. This first book of the Robot Horizon Series presents a modest book cover and a mere two-sentence description that managed to immediately snag my attention.

The story is a post-apocalyptic dystopia. Humanity has succumbed to plague and environmental devastation. Only the robots remain.

Before the apocalypse, many types of robots had been integrated into human society, and robot engineers in Mech City developed new ones right up to the very end.

This is the place where Dr. Anna Horvath tells her blue humanite model robot Winston to go with her dying words. She has filled his data reservoir with all the knowledge of humankind and gives him the task of preserving this legacy. Her orders give Winston a reason not to jump from a window and kill himself.

In Mech City, he finds robots adrift without purpose. No humans remain to give them tasks, and many hurl themselves from upper stories. Most of the robots are worker robots. They are built for manual functions and differ from a humanite like Winston, who lacks physical strength.

Winston begins saving robots by giving them new purpose. He has them renovate buildings. Grateful for the direction he offers, they quickly start calling him "Boss" and he likes it.

Winston meets Star. She was built to look like a perfect woman and be desirous of giving and receiving sexual pleasure. I admired how Bakos made the sex slave robot fresh again. Star is a complex character, curious, kind, and inherently good.

But not all robots are awaiting orders or good in their hard drives. Fascista Ultimo, F.U. to his friends, has plotted a takeover of Mech City and plans to rule all of robot kind. Aided by robots of sinister and destructive design, he forcefully enlists Winston to his inner circle because of his influence over the worker robots. Winston complies because he does not want to be destroyed. As a scholarly robot, however, he possesses the data and programming to recognize the dangerous insanity of F.U.

For example, F.U. says, "It's all about the natural hierarchy. We Humanites were created to be the Master Race, the successors of the founding humans."

And from his Manifesto:

"The true Fascist leader must give his followers the sense that their rotten little prejudices are something exalted and pure."

This novel is both complex and easy to read. The prose flows, and the skill with which Bakos treats the development of robot characters impressed me.

The post-apocalyptic turmoil drives Winston to experience sensations increasingly close to emotions. His programming sometimes literally crashes as he copes with terrible problems and tragedies. The adoration of the worker robots immediately builds his ego, and he likes the power. But when he see the evil of F.U. he recognizes how corrupting the love of power can be.

For me, the novel created an amazing fictional study about what the world of robots might be like. We live in a time of Big Data, robotics, and artificial intelligence. Against this real-world backdrop, Bakos imagined an artificial culture in its infancy as it struggled with chaos, oppression, and revolution.

The actions of the robots, while staying genuinely within the realm of their digital souls, reminded me strongly of the beauty and ugliness within humanity.

In Return to Mech City, I joined with characters who showed that artificial intelligence finds the great problems of the ages no easier to deal with than my organic brain.

Half of the plot is dependent on a world full of robots, where there are no self driving cars. Yeah, slight issue there.

The work has good and bad spots, a couple of times early on I almost put it down, but I stuck with it and mostly enjoyed it. The science not very scientific, but it does ok.

Not at all what I was expecting, and that's a good thing. At times, it felt like a post apocalyptic Hobbit; the main character going on a most unexpected journey. At others, it almost felt as if it would be at home in school textbook, as an outlandish example of the pitfalls, and road-paved-with-good-intentions path to facism. Somewhere, where the two meet, arises a most enjoyable read.
Long live Winston!

Very much loved reading it.

Like Janr I haven't finished it yet, but it's so good I wanted to post a review before I forgot. Excellent character driven book so far.

I have yet to finish this book but so far consider it very entertaining, creative and well written. I highly recommend it even though I have not yet finished reading it. Janr Ssor, author

Scary, insightful, sexy. What else can I say? Mech City is quite a destination. Hope the sequel comes out soon.

An amazing story! Looking forward to the sequel.

(review of free book)
Emilia and Zbigniew Fitz reviewed on May 15, 2013

Very original idea. Apocalyptic images can visit our mind sometimes, but your story is uplifting. Thank you for that.

You have subscribed to alerts for Brian Bakos.

You have been added to Brian Bakos's favorite list.

You can also sign-up to receive email notifications whenever Brian Bakos releases a new book.