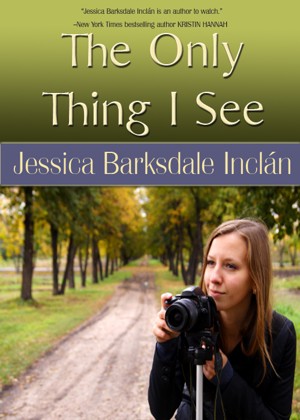 The Only Thing I See

By Jessica Barksdale Inclan
Rated 4.00/5 based on 3 reviews
Annabelle Cousins loves being a wedding photographer. But around the time of her own engagement, she starts to see the future of the couples through the lens. With the help from her Tarot card reading mother and her best friend, she seeks out the truth behind what she sees. After meeting the couple Robert and Nadine she discovers that the life she has might not be the one she wants after all.
Available ebook formats: epub mobi pdf rtf lrf pdb txt html
First 15% Sample: epub mobi (Kindle) lrf more Online Reader
pdb
Price: $2.99 USD
Buy Add to Library Give as a Gift
How gifting works
Create Widget
Tags: romance love friendship dating photography wedding tarot chic wedding planners
About Jessica Barksdale Inclan

Jessica Barksdale Inclán’s fourteenth novel, The Burning Hour, was published by Urban Farmhouse Press in April 2016. Her novels include Her Daughter’s Eyes, The Matter of Grace, and When You Believe. Her poetry collection When We Almost Drowned is forthcoming from Finishing Line Press. A Pushcart Prize, Million Writers Award, and Best-of-the-Net nominee, her short stories, poems, and essays have appeared in or are forthcoming in the Waccamaw Journal, Salt Hill Journal, Little Patuxent Review, Carve Magazine, Palaver, and So to Speak.

Barksdale Inclán is a Professor of English at Diablo Valley College in Pleasant Hill, California and teaches novel writing online for UCLA Extension and in the MFA program for Southern New Hampshire University. She holds an MA in English Literature from San Francisco State University and an MFA from the Rainier Writers Workshop at Pacific Lutheran University.

The mother of two grown sons, Jessica lives in Oakland, California with her husband

Reviews of The Only Thing I See by Jessica Barksdale Inclan

Jessica Barksdale Inclan is a romance novelist with a dozen traditionally published books, including the Being and Believe trilogies. Along with her success with traditional publishing houses, Inclan has chosen to explore self publishing and has plans to release a selection of new and backlist works in electronic format.
The Only Thing I See is a contemporary story of complicated relationships. Annabelle Cousins can't seem to find the passion she once had for her career as a wedding photographer. As she looks through her lens she is suddenly seeing more than she expects. Instead of bringing clarity to her life, Annabelle finds her heightened sense are clouding her judgement. She is taken by suprise when her fiance leaves, and confused by her attraction to a groom to be. Her carefully planned life is crumbling around her.
Despite the veneer of romance, this novel is focused on exploring Annabelle's journey towards emotional maturity. I found Annabelle to have a passive nature that highlights her poor self esteem. Self pity is rarely an attractive trait in a romantic heroine yet Annabelle does attract sympathy as she struggles with finding her way towards fulfillment. Most women can empathise with the devastation after the break up of a long term relationship, no matter how appropriate the decision. Inclan captures her hurt, confusion and eventual acceptance deftly.
The romantic relationship is complicated by an obvious obstacle that would usually preclude a developing relationship. I felt sorry for Nadine even while accepting the idea that her relationship with Robert was not meant to be. Inclan has very carefully navigated the path it takes but it's a difficult task and I wasn't wholly convinced. The circumstances don't inspire confidence in the traditional HEA ending yet I was left with the hope that Annabelle would find happiness.
The source of Annabelle's intuition is never fully resolved. Inclan leaves it to the reader to interpret with a deliberate sense of mystery. This thread, and the tarot readings, underscore the idea of fate and destiny and its inevitability that is a major theme in the novel.
A quick and satisying read, The Only Thing I See is a thoughtful story that examines complicated relationships in modern times with original elements and likeable characters.

Annabelle is a wedding photographer. She has a talent for capturing other people's happiness, but has trouble recognizing her own. When she herself becomes engaged, she starts "seeing" the future happiness (or unhappiness) of the lovestruck couples she photographs. The only problem is, she can't seem to see the truth in the relationship right in front of her. With the unintentional nudges of her best friend and her quirky mom, Annabelle finds herself taking a philosophical journey she just wasn't quite ready to take. She can't see herself through her camera lens, but perhaps she can see finally herself through the reflection of the two people who mean the most to her.

I really had fun with this tale by Jessica Barksdale Inclan, devouring it in short order. The characters of Annabelle, her best friend (Khalie), and her mother (Ramona) are all well-developed and quite engaging. Easy to read and utterly charming, it's effortless to become absorbed in this tale of emotional growth overlaid in romantic tones. Although the ending is predictable, it's still satisfying as you wait for Annabelle to finally realize what you've known the whole time. It's a feel-good tale that will leave you with a happy sigh, content that things are right with the world.

There were a few more than a handful of typos in the story- not super distracting, but still noticeable. The storyline flows along fairly smoothly; there are a few bumps for Annabelle along the way, but not really that "gasp" moment present in some books of this genre. I may have preferred a bit more conflict along the way to make that neatly tied-up ending even sweeter. I sometimes prefer a bit of ambiguity in an ending, even for a storyline meant to leave you feeling happy and satisfied. Overall, a great read, one that fans of this genre will devour.

WOW!! What an awesome book. I couldn't put this one down and ended up reading this one in one night! I do not often read in bed for hours but this one is so well written and made me want to finish it on that night. This is ebook is a must buy if you are into women's fiction.

You have subscribed to alerts for Jessica Barksdale Inclan.

You have been added to Jessica Barksdale Inclan's favorite list.

You can also sign-up to receive email notifications whenever Jessica Barksdale Inclan releases a new book.