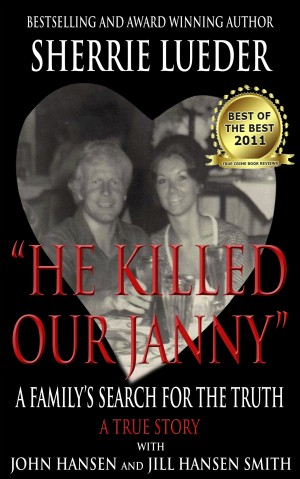 "He Killed Our Janny:" A Family's Search for the Truth

5 STARS! "This book evoked so much emotion from me - Book voyeurs who are able to tackle tough subject matter will love this tale." --Kim Cantrell, True Crime Book Reviews

Gripping story of child abuse, domestic violence and corruption in the suburbs of Denver, Colorado. Not at all unaware, a son and daughter chronicle the events leading up to the mysterious death of their mother. This book is the first to explore the mysterious death of Janyce "Janny" Hansen, a former top model from Denver, Colorado. She, along with her husband and children, live in an upscale home in the suburbs. The community sees an affluent, glamorous family. The reality is far different--an abused wife who can't let go; a husband who beats and sexually assaults his adopted children--while running gambling and prostitution businesses from their home.

In the early morning hours of September 21, 1984, Janny's husband returns home to discover her lifeless body in his Mercedes convertible parked in the garage--or so he says. Her family is led to believe she committed suicide.

Now, 25 years later, her son and daughter set out to prove she was killed by her husband, a successful real estate developer rumored to have strong ties to city officials and underworld crime. Many believe the investigation into Janny's death was a cover-up--starting with the coroner's office--and that her husband got away with murder.

As the siblings' investigation continues, they are led to believe their suspicions are true. Especially since evidence increases almost daily and points to only one killer--their father.

TCBR - 5 stars -- "In her new book author Sherrie Lueder recounts the life of Richard and Janyce Hansen, as told to her by two of Janyce's children and Court documents. "He Killed Our Janny" doesn't read so much like a book, per se, but more like written account of a friend's story. It was a pleasant change from the textbook-style of many of today's writers. When I was reading, I didn't want to stop; when I had to put it down, I couldn't wait to get back to reading. I wanted to know the ending. . . . Book voyeurs who are able to tackle tough subject matter will love "He Killed Our Janny" by Sherrie Lueder." --Kim Cantrell, TRUE CRIME BOOK REVIEWS

“Fueled by the frustration of decades of a criminal cover-up, the siblings go forth to unravel the truth with their own investigation… The story is told to, and brilliantly put together by bestselling author, Sherrie Lueder… Let's talk literary excellence: on the heels of being awarded 'Best of the Best of 2011 True Crime Book Reviews' is the release of the official He Killed Our Janny trailer. The clip is enthralling. . . . The trailer looks like the book could be really good - and it is. Can't wait for the day I watch it on the big screen.” --Fran Briggs BOOK TRAILER: http://www.youtube.com/watch?v=XaU7j-JMTNI
Available ebook formats: epub mobi pdf rtf lrf pdb txt html
First 15% Sample: epub mobi (Kindle) lrf more Online Reader
pdb
Price: $2.99 USD
Buy Add to Library Give as a Gift
How gifting works
Create Widget
Tags: true crime domestic violence parenting memoirs cold case unsolved aurora colorado janyce hansen alcohol abuse drug abuse richard hansen arapahoe county child abuse sexual abuse corruption coverup dysfunctional family discovery id investigation discovery john hansen
About Sherrie Lueder

SHERRIE LUEDER is the author of Amazon Best Seller and two-time Award Winning true crime book "HE KILLED OUR JANNY": A Family's Search for the Truth. She was born in 1951 in Tracy, Minn., and christened Sherrie Rae Taarud. She would be the second oldest of four siblings.

After meeting her husband, she settled in his home state of Wisconsin, where they chose to raise their four children. Lueder has lived in Fort Atkinson since 1983. She and her husband are well-known in the community as the owners of L&L Automotive.

Lueder loved spending her summers near the water and enjoyed long days of lounging on the beach, reading mystery novels and writing poetry. The literary career began when one of her poems, “A Tribute to Mom” was published in a local newspaper, (The Lake Park News on Dec. 29, 1979), and later appeared in Eddie-Lou Cole’s "Anthology of Great Poems". She is currently working on several book projects and recently released ASPEN, SNOW, BLOW, AND BO, and MY GUARDED SECRETS." For more information please visit her website.

JOHN HANSEN is a contributing author of "HE KILLED OUR JANNY." He is the youngest sibling and son of Richard and Janyce Hansen. He was raised in Denver, CO and resides in Gilbert, AZ.

JILL HANSEN SMITH is a contributing author of "HE KILLED OUR JANNY." She is the youngest daughter of Janyce Hansen. She was raised in Denver, CO and resides in Aurora, CO.

Book Trailer: Until Someone Gets Hurt
True Crime Author Sherrie Lueder releases 2nd book with co-author Tyson Wrensch "Until Someone Gets Hurt", The Multi-Layered Crime Spree and Murder By a Master Criminal Enterprise. "The breathtaking scope, complexity and theatrics of this scam and these con men rivals any Hollywood movie." --Kamala Harris, Attorney General for the State of California Now available in paperback and ebook.

You have subscribed to alerts for Sherrie Lueder.

You have been added to Sherrie Lueder's favorite list.

You can also sign-up to receive email notifications whenever Sherrie Lueder releases a new book.