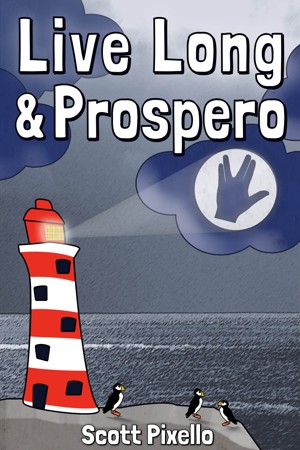 Please note, this is a novella, and priced accordingly.
Like Billy Crystal, Gromit and Boris Johnson’s hair , it may be a bit short but it’s still funny.
Available ebook formats: epub
Price: $2.99 USD
Buy Add to Library Give as a Gift
How gifting works
Create Widget
Tags: humour ya star trek automation lighthouse the tempest thatcherism stammer privatisation
About Scott Pixello

I’m a moderately-disturbed Brit who writes books. I’ve had seven books of non-fiction published with three different publishers under another name but as Scott Pixello, I've written eight ebooks, mostly dark comedies, aimed at twisted YA readers or immature adults. Luke I am Your Father takes a look at the funny side of unplanned pregnancy,Gothic Girl features a central character that 'goes Goth' and Live Long and Prospero is about a bunch of lunatics on a lighthouse. Rainbow is about a psychic cow that can predict soccer scores and Gagfest follows a heckler who takes exception to a stand-up comedy routine.
I could tell you my real name but then I’d have to kill you and no-one wants that. I’ve got ideas for about another dozen novels so I’m pretty busy. Unfortunately, my wish not to be rich & famous is somewhat at odds with conventional wisdom about how the Internet works, in which shyness is like Kryptonite to online sales. I don’t Tweet or even have a mobile phone. I’m probably the leader of a Luddite cult but no-one can phone me to tell me so. I am on Facebook though- I’m not a total freak (see www.facebook.com/scott.pixello).

Reviews of Live Long and Prospero by Scott Pixello

You have subscribed to alerts for Scott Pixello.

You have been added to Scott Pixello's favorite list.

You can also sign-up to receive email notifications whenever Scott Pixello releases a new book.