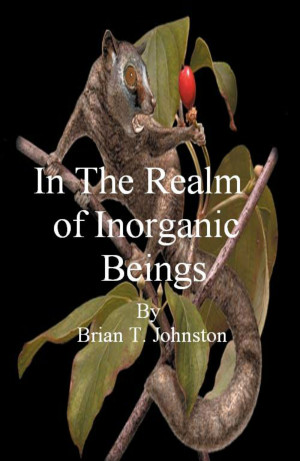 In The Realm of Inorganic Beings

By Brian Johnston
Brian Johnston takes us on a mind bending trip spanning over forty years of involvement with mysticism. His was a quest to know the truth about the nature of reality through transcendental meditation the teachings of Don Juan and by becoming a Rosicrucian Illuminati. He delves deeply into the subject of reincarnation and the negative associations that mankind has with the demonic inorganic beings

Brian Johnston has been involved with mysticism for over forty years.
He has studied with the Rosicrucian Order and attained the Twelfth
Degree and became an Illuminati of the Order and has also been a
practitioner of the Toltec system since 1969. He began studying Don
Juan and Carlos Castaneda at that time and has applied the principles
associated with this work since then. He is also an expert astrologer
and became widely known around the world for his work into
astrological research. In this regard he was able to demonstrate a
statistical link between the aspects of the planets and the rate of
earthquakes on the earth. He has published many articles in the
International Astrologer and in Horoscope Magazine. He was a
member of the International Society for Astrological Research for
many years. Brian is also an advanced amateur astronomer and has
been president of the Pine Ridge Astronomical Society. He was also
Master at the Rosicrucian Pronoas in Peterborough, Ontario, Canada.

You have subscribed to alerts for Brian Johnston.

You have been added to Brian Johnston's favorite list.

You can also sign-up to receive email notifications whenever Brian Johnston releases a new book.