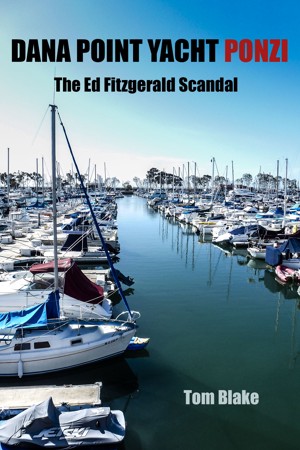 By Tom Blake
Book updated July 30, 2015. The saga of Ed Fitzgerald ended on Monday, July 27, 2015, at the Superior Court House in Santa Ana, California, six years and 10 days after Fitzgerald disappeared in what appeared as a Dana Point, California Yacht Ponzi scheme. Fitzgerald was arrested on May 10, 2013, in Delray Beach, Florida. A plea deal offered by Judge R. Fitzgerald (not related to Ed), was accepted. More
This book has been updated on May 27, 2013, with the most current information.

Included is a May 10, 2013, press release from the Orange County, California, District Attorney about the arrest of Edward Sellers Fitzgerald. Details are in the book.

On May 26, the author received a phone call from Delray Beach, Florida, from a neighbor of Fitzgerald who described the life he was living in Florida. She was totally shocked by the news of his arrest. She just couldn't believe it. Details of the conversation are listed in the text of the book.

Ed Fitzgerald was a yacht broker in Dana Point, California, for more than 25 years. He operated a company called Dana Island Yachts that sold and brokered boats, ran whale-watching charters, and rented boat slips that were under his control. He was trusted and well liked.

Often, he could be found at the Wind & Sea restaurant in Dana Point Harbor buying drinks for his boating buddies and had a reputation for loving and consuming Mai Tai’s. He wrecked a few cars and garnered at least two DUIs.

He lived a lifestyle that was above his means so he supplemented it by borrowing money from people in what developed into a Ponzi scheme. He also had other illegal ways of raising money that are discussed in depth in this book.

When the economy went south in 2008-2009, Fitzgerald’s income sources started to dry up, his business fell on hard times, and yet he had obligations he had to pay. He got trapped in a perfect financial storm and made a decision around July 17, 2009, to simply disappear. Friends and lenders were shocked, as was the entire Dana Point boating community.

The Orange County Sheriff investigated the case for about a year and half. In early 2011, the Sheriff sent the case to the Orange County District Attorney. It took awhile but the big news finally arrived.

The author, a Dana Point newspaper columnist, knew Fitzgerald well. He has spent three years uncovering details about the case. This is the story.

Tom Blake is an author and syndicated column in Southern California. He has written more than 4,100 columns and email newsletters on finding love after 50. Tom's website, www.findingloveafter50.com, has articles and videos.

He is the author of four printed books and several ebooks (on Smashwords.com and Amazon.com)

John Gray, PhD, author of "Men Are From Mars. Women Are From Venus," says Tom is an expert on dating after 50.

Tom has appeared on the Today Show and Good Morning America.

Each Friday, he emails the complimentary "On Life and Love After 50" Newsletter to several thousand subscribers across the USA, Canada and in other foreign countries. Sign up at www.findingloveafter50.com, or email Tom at tompblake@gmail.com

You have subscribed to alerts for Tom Blake.

You have been added to Tom Blake's favorite list.

You can also sign-up to receive email notifications whenever Tom Blake releases a new book.