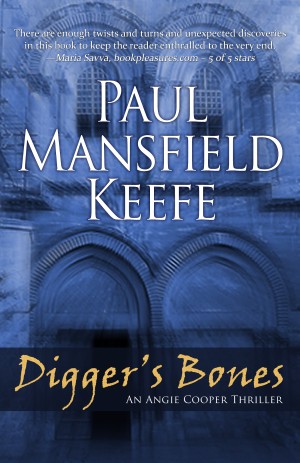 Paul Mansfield Keefe was born in Lowell, Massachusetts and grew up in Manchester, New Hampshire. He worked as a multimedia artist and programmer for non-profits and corporations creating websites and applications since the early years of the Internet. Music and animation led him to realize his story telling talents could best be put to use in writing novels. Digger's Bones, the first book in the Angie Cooper Series, is his first novel.

Paul Mansfield Keefe starts with a great premise: an archaeologist is murdered at his dig site, and his assistant has all of the clues that will help figure out why. Said assistant goes to a disgraced former student of the archaeologist ... and is murdered while providing her with the information she needs.

This is how the book begins. The plot is great, and the concept outstanding. We are taken to various sites throughout the Holy Land, Europe and the United States in the pages of this adventure, which has a very likeable heroine in the person of Angie Cooper.

I was very excited to read this story, but often found my experience interrupted by editorial errors, sudden shifts from past to present tense, third person to omniscient, and homophone errors. The story is great, but an updated edition that corrects these problems would be most welcomed.

I also saw the "whodunnit" coming for miles, but must give the caveat that I read a great many mysteries and it is hard to get one past me.

Recommended for mystery fans, with the above caveats well in mind.

Some archeological finds can have an enormous impact on the world. Is there ever a time when those finds should be kept from the public? Angie Cooper is faced with this dilemma. Along the way, she is sucked into a world of conspiracy and deceit that threatens much of what she thought she knew about herself, her friends and the world.

Digger's Bones is a fast-paced adventure. The biblical and historical facts interspersed throughout are well-researched and give a realistic feel to the story.

This book has a fascinating premise and would be perfect for a reading/discussion group.

A very impressive debut novel. Digger’s Bones is a thriller with substance. Angie Cooper is a failed archaeologist; having wanted nothing more than to pursue her lifelong dream to follow in her father’s footsteps and become an accomplished archaeologist, she destroys her career by being too impulsive and making a huge mistake.
We meet Angie at her lowest ebb, she has lost touch with her friends, her career has ended and she has also recently lost her mother. Her father died when she was a child and she still harbours feeling she associates with guilt over his death and experiences recurring nightmares.

Out of the blue, her old friend, Tarek ‘Digger’ Rashid, contacts her, asking her to meet him. At their meeting, in a restaurant, he advises her that a former colleague of theirs, Professor Rothschild, is dead. Then, a strange man joins them at the table, and kills Digger; taking away the Manila folder that Digger had brought with him.
Angie is left reeling; two of her colleagues are dead and someone is evidently keen to stop some information being disclosed. Professor Rothschild and Digger had obviously unearthed an important archaeological find. Digger’s last words to her were that she should revisit a place they had been together, Bandelier, New Mexico, and look in a hidey-hole. Angie knew that he must have left something there for her to find, something with implications so huge that people were prepared to kill to prevent the word getting out.

Digger was the only one who’d stood by Angie when her career was falling apart and had always been there for her. Even though she knows she will be risking her own life, she is determined to find out what Digger had wanted to tell her.

In the hidey-hole, Angie finds a flash drive containing photographs which appear to hold clues to the mystery. Angie knew that Professor Rothschild had a theory that Judas’s bones were somewhere in the holy land and he wanted to find them. Perhaps he had? Fans of Dan Brown’s books will find more religious controversy to whet their appetites within these pages.

We follow Angie on her travels to locate Digger’s bones. She is ruthlessly pursued by the strange man from the restaurant, who she now knows is called ‘Tek’. But he is not the only one who wants to stop her uncovering the secret. Many people associated with Digger’s bones are being killed. But who is the killer?

As she embarks on her search for the bones, Angie is reunited with her former lover, Reilly, and for a time it seems that her life may be getting back on track; perhaps if she discovers the bones, she could get back to her work as an archaeologist and be taken seriously again? But even Reilly is reluctant to help her in her search when the going gets tough.
There is a lot of edge-of-your-seat action in this book as Angie is forced to run for her life on more than a couple of occasions. The action scenes are well written and compulsive, and this complex story is crafted with skill. There is a lot of historical information in the book, showing that it was well-researched.

All the characters are believable, and I was especially impressed by the character of Angie Cooper whose emotions and thoughts were so realistic as those from a female perspective.
This book contains action, adventure, mystery and romance. Angie’s character is particularly well-developed as she tries to deal with her emotional baggage in regard to her father’s death. The subjects of regret, guilt and forgiveness are dealt with well by the author.

There are enough twists and turns and unexpected discoveries in this book to keep the reader enthralled to the end. A very enjoyable read.

Reviewed by Maria Savva as a reviewer for Bookpleasures.com

(reviewed the day of purchase)
Magnolia Belle reviewed on Jan. 1, 2011

In “Digger’s Bones,” Angie Cooper, a disgraced archeologist, finds herself embroiled in ancient mysteries and modern day villains when her mentor, Professor Stanley Rothschild, is murdered on his excavation site in Jerusalem. Their mutual friend, Tarek “Digger” Rashid, asks to meet her in Washington, DC to tell her of the murder and is killed in front of her by a hitman, Tek. An old boyfriend, Jack Reilly, tries to help her decipher clues she was left on a USB drive from Digger’s computer.

Just like Angie’s bad case of vertigo, you will find the horizon spinning as the clues lead you from one conclusion to another, and to one part of the globe to another. The author, Paul Mansfield Keefe, knows how to twist a story and how to keep subplots bubbling. He writes with authority on sites in Jerusalem and makes them come alive through his pen. If you like to try and figure out whodunit before the book ends, this one’s definitely for you!

You have subscribed to alerts for Paul Mansfield Keefe.

You have been added to Paul Mansfield Keefe's favorite list.

You can also sign-up to receive email notifications whenever Paul Mansfield Keefe releases a new book.