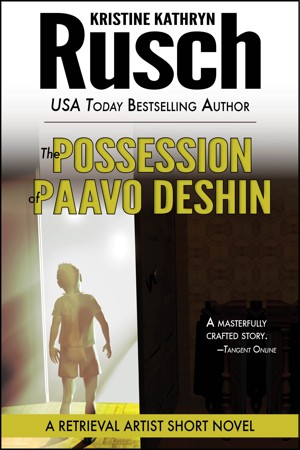 The Possession of Paavo Deshin: A Retrieval Artist Short Novel

“The Possession of Paavo Deshin” is a masterfully crafted story. Definitely don't miss this one.
—Tangent Online

A custody battle like no other, where every side has its own agenda. An engaging story, a title very apt.
—Internet Review of Science Fiction

Reviews of The Possession of Paavo Deshin: A Retrieval Artist Short Novel by Kristine Kathryn Rusch

Although it's not necessary to read this short novel, it will add an extra dimension to the next regular-length novel, Anniversary Day. (At least you'll be in the know when Ms. Rusch mentions Paavo and his father briefly in Anniversary.)

Paavo Deshin is an extremely intelligent but very strange boy; including the fact that he sees ghosts. When he mentions seeing them yet again at school for brainiac kids, his mother hits the roof over how they managed to infiltrate the school without tripping any systems, the headmistress goes to work on getting her security people to figure out how that could have happened. When they can't come up with anything, she turns to (you guessed it)...Miles Flint.

While the mother seems to be compassionate, the father is anything but, and there's a hint at some criminality in his past...and maybe he's still at it...

He does try to do the right thing with Paavo because, deep down, he does love the child, so he's not just one dimensional. Ms. Rusch packs a lot of emotion into her stories, and this one does not disappoint.

There's enough of a twist here to keep you engrossed to the very end.