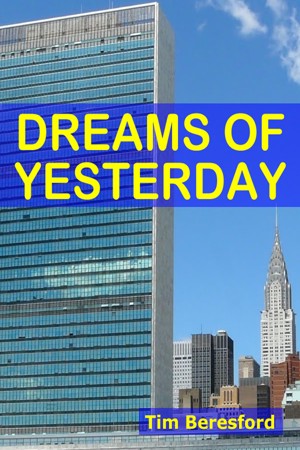 This will present mankind with the most important moment in its history; while requiring the most significant decision that human society has ever had to make.

A new and wonderful future is on offer... but will those in control, who benefit most from the status quo, be prepared to sacrifice their power in order to benefit the whole of mankind...?

Will our civilisation rise... or fall...?

But when an opportunity presented itself to leave behind the world of commerce and grab a chance to do something creative, I took it.

I had always wanted to explore a particular science fiction idea, which I originally had when I was much younger. (I am still surprised that none of the great writers in the field had already tackled it.) It’s the possibility of sending messages back in time using tachyons.

(This IS a possibility - recent events at CERN show that many serious scientists take the idea of particles moving backwards in time seriously. It does not contravene general relativity, or quantum mechanics - at least as far as I am aware at time of writing. It is certainly far more plausible than faster-than-light spaceships; artificial gravity, transporters, and inertial dampers).

However, by the time I was ready to begin work on my magnum opus, I had also become concerned with some real-world problems. The ones we all face here on Earth - now, and in the near future.

After considerable thought and planning, I realised I could combine the serious scientific speculation about time-messaging with my concerns about mankind’s future, by having the story examine the potential effect of time-messaging on our global social and political setup. It seemed that I finally had a framework for my first novel!

However, soon after I started writing, I realised that the scope of this story would be too large to fit comfortably into just one novel.

The result is, The Yesterday Trilogy.

Three full-length novels which, together, tell one possible outcome of what might happen if we managed to send a message just a few hours backwards in time.

What would you do with such a capability?

What might you tell yourself in such a message?

Whether it’s going to rain on you today?

But what if everyone got to know about this capability? What then?

If you’d like to know what I imagined on the subject, during five years of research and writing, then I think you know what to do!

Also in Series: The Yesterday Trilogy

You have subscribed to alerts for Tim Beresford.

You have been added to Tim Beresford's favorite list.

You can also sign-up to receive email notifications whenever Tim Beresford releases a new book.