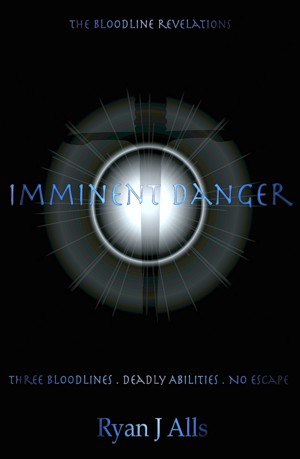 Ryan J Alls, author of The Bloodline Revelations series, won the hearts and eyes of many young adults with the release of his debut novel, “Imminent Danger.” The novel, knocking down all boundaries of the young adult genre, delivered graphic action and creative fantasy to a highly receptive audience. After much success of bringing “Imminent Danger” to fans and small bookstores directly, Ryan expanded the series to online retailers such as Amazon and Barnes & Noble.

“Kismet Task Force," the upcoming sequel in The Bloodline Revelations series, is due for release in August 2015. You can visit Ryan's website at www.RyanJAlls.com

Reviews of Imminent Danger (The Bloodline Revelations, Book One) by Ryan J Alls

I was actually quite surprised about how good this book was. The plot took its time at the beginning going slow at first. Once the plot got going, I found myself anxiously awaiting for the next action scene or the next chapter. This book is definitely different than any of the other action books I have read and also different from the fantasy books. It doesnt follow the typical geeky fantasy books or mindless action books. It delivers great characters with creative and detailed battle scenes. I also like how it is a easy read. Since it is suppose to be a young adult book i guess that its expected, but what was great was that it didn't take away from the ambiguous meaning and the complex world the characters lived in. There was culture, struggles and even taunts. Yes taunts. At first I was confused at why characters were gloating. But then I found myself highly entertained when one would take down another and then insult them after claiming victory. I think this is a series so I cant wait to read the next one.

You have subscribed to Smashwords Alerts new release notifications for Ryan J Alls.

You have been added to Ryan J Alls's favorite list.

You can also sign-up to receive email notifications whenever Ryan J Alls releases a new book.