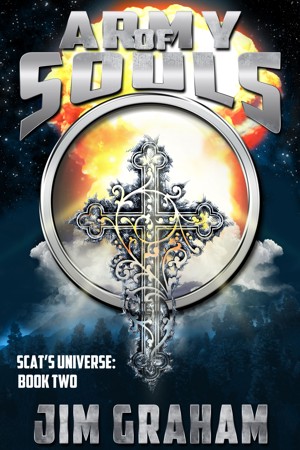 By Jim Graham
The Lynthax Corporation is history, but it's legacy lingers and Mankind’s soul is little more than a tank of gas.

Book One, SCAT, is currently free. More
'If you are going through Hell, keep going.' --Winston Churchill. But what can you do if Hell gives chase?

Sebastian Scatkiewicz didn’t ask to become the fulcrum about which human history moved; it just happened that way. A US Marine who’d seen a little too much, Scat just hoped for a new life in the New Worlds. Since then, he’s been embroiled in ever-larger conflicts, one stacked atop another.

Now, in his greatest adventure (so far), Scat finds not just the fate of human life, but the fate of the afterlife itself placed squarely upon his shoulders.

The second full-length Scat’s Universe novel provides all the thrills, twists, turns, and puzzles of his first, but ratchets them up. The politics, the deceit, the lies, the wheels-within-wheels conspiracies – not to mention the fighting – are all bigger, deeper, more urgent.

If the stakes were high before, they’ve never been higher than they are now.

Praise for book one:

"BLOODY BRAVO!! What an enthralling read! What an amazing concept!"

"Scat is a big, intelligent, interesting novel. If you enjoy hard gritty sf with plenty of well-handled dialogue, you will not go far wrong with this one."

"Great stuff. Loved the concepts going on here, I like when someone creates a new and believable universe. There's a whole lotta book going on here, so strap yourself in for the ride!
10 out of 10!"

"...the coda is, well, I was drop jawed. I don’t get drop jawed often... the new technology proves to have a horrifying price that I honestly didn’t see coming, that I’ve never seen used before in a lifetime of reading SF, and which - hopefully - will be the setup for a sequel.--Republibot.com

"Scat is a sprawling novel, spanning years, full of ideas and conflicts that resonate in today’s world, as good sci-fi is supposed to. ... Graham bombards the reader with ideas and the Scat’s ambition and scope are a marvel." --Indiereader.com

'Army of Souls' picks up the Scat's Universe story a few months after the conclusion to 'Scat'.

Jim was born in Bushey, Middlesex, England and grew up in Hatfield, Hertfordshire. He passed selection for the 21st Special Air Service Regiment at age 17 and was later commissioned into the 3rd Battalion, The Queen’s Regiment as a Second Lieutenant. He spent several years in Northern Ireland during the late 70s and early 80s. Since leaving the army in 1986, he has worked in Malaysia, South Africa, Belgium, Singapore and Hong Kong.

Jim started writing scifi in September 2010 and has since published SCAT and BIRDIE DOWN, both based on events in Scat’s Universe. ARMY of SOULS, the sequel to SCAT is also available from Amazon and Smashwords. SCAT is a big 'what if'. ARMY of SOULS is more of a 'what now'. Both are space operas, which question political systems, economic dependency, compromised regulators, and too big to fail businesses, and go on to question conflict between knowledge and faith. BIRDIE DOWN and the up-coming PHARMA are rebellion 'shoot 'em ups'.

Jim now lives with Vivien, his Malaysian-born wife, two East Asian street dogs and four pampered cats in Asia’s World City, Hong Kong. It is the company-run city which inspired Go Down City and the Lynthax Corporation in Scat’s Universe.

You have subscribed to alerts for Jim Graham.

You have been added to Jim Graham's favorite list.

You can also sign-up to receive email notifications whenever Jim Graham releases a new book.