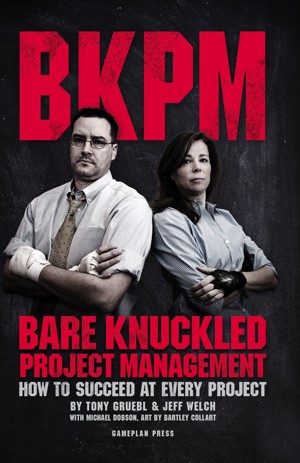 Bare Knuckled Project Management: How to Succeed at Every Project

By Tony Gruebl
Rated 5.00/5 based on 1 review
As many as 70% of projects fail, costing billions of dollars. You’ve hired certified project managers and implemented project management techniques, and yet you still don’t have the success you need. You need a Bare-Knuckled Project Manager, someone not afraid to ruffle a few feathers, make hard decisions, and speak key truths to people who don't always want to hear bad news. More
“When the going gets tough, they call for the sons of bitches! — Admiral Ernest King (attributed)

It’s a sad fact that most projects fail — as many as 70% according to one well known study. Those failed projects cost billions of dollars. Perhaps they’ve even cost you or your company. You’ve hired certified project managers and implemented project management techniques, and yet you still don’t have the success you need.

BARE KNUCKLED PROJECT MANAGEMENT has the answer. Of course, there are lots of management philosophies that tell you that if you just follow a few simple rules, you’ll have perfect results. But it’s never that simple, and we know it.

The bare-knuckled approach to project management is all about the people. Anybody can swing a bat, but that doesn’t mean anybody can be a major leaguer. It’s all about the person. It takes talent, temperament, training, experience, and aptitude to achieve greatness. And make no mistake, for great projects, you need a great project manager — someone who isn’t afraid to do what it takes to get the job done.

You need a Bare-Knuckled Project Manager, someone not afraid to ruffle a few feathers, make hard decisions, and speak unpleasant truths to people who don’t always want to hear bad news.

In this insightful and powerful book, you’ll learn:

*** The key reasons projects fail, and the simple steps needed to avoid the most common mistakes.

*** How the “three sided table” approach empowers project managers, customers, and teams to do excellent work.

*** How to become a Bare-Knuckled Project Manager, and how to groom others.

*** How to handle conflict and communication like a pro.

*** How the “Kranz Dictum” that saved NASA’s Apollo Program can save your most troubled projects.

*** How to transform the organization using the Bare Knuckle approach.

His experience includes an extensive list of BI technology implementations and strategic project management and control engagements for domestic, international, and multinational firms over a twenty-year span.

In 2007, he led a series of technology implementations for a partner company that resulted in his team winning the AT&T Supplier Recognition Award in Customer Service from among 5,000 suppliers (as noted in the Wall Street Journal and Yahoo Finance on 6/5/07).

Before starting Think, Tony was the Chief Operating Officer of a Washington, DC, non-profit firm that is also one of the company’s current clients.

This follows a career built in the Business Intelligence technology space, in which he served as vice president of a Pennsylvania-based OLAP financial software provider and Director of Consulting for a Bethesda, Maryland-based IT company specializing in focused solutions for the federal government.

Tony earned an MBA in Financial Management and Technology Entrepreneurship from Rensselaer Polytechnic Institute, studied abroad at the Copenhagen Business School, and completed his undergraduate work at Towson University. He lives in Perry Hall, Maryland, with his wife, Dana, and their four children and loves motorcycles and clinging to his God and guns.

Reviews of Bare Knuckled Project Management: How to Succeed at Every Project by Tony Gruebl

A MUST read. BKPM is real page-turner and very well written. I will be getting the word out about Think Systems, Inc. and Tony Gruebl.

You have subscribed to Smashwords Alerts new release notifications for Tony Gruebl.

You have been added to Tony Gruebl's favorite list.

You can also sign-up to receive email notifications whenever Tony Gruebl releases a new book.