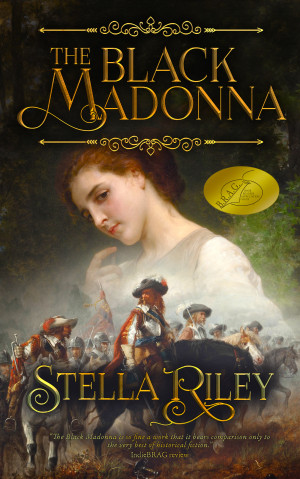 By Stella Riley
Rated 5.00/5 based on 1 reviews
An epic saga of love and revenge, in which the English Civil War and the crucial years leading up to it are seen through the eyes of the Maxwell family and also master-goldsmith and money-lender, Luciano Falcieri del Santi … a man with a hidden agenda.
From the power-struggle in Parliament to bloody battlefields, The Black Madonna is a historically-detailed story of intrigue and love. More
By July 1639, England has become a simmering cauldron of discontent. Less concerned by this than by his ailing finances, King Charles seeks ways of filling his empty treasury. Enter Luciano Falcieri del Santi - master-goldsmith and money-lender; a man known to London as The Italian ... and possessed of a hidden agenda.

From his seat in the House of Commons, Richard Maxwell watches the inexorable approach of Civil War. His eldest son, Eden, struggles to save his marriage to Royalist-bred Celia whilst taking up his sword for the Parliament; and daughter, Kate, vows to hold their home against both Cavalier and Roundhead should the need arise.

A spirited red-head, Kate takes most things in her stride. The only thing she finds impossible to handle is her involuntary and growing attraction to the razor-tongued, magnetic and diabolically beautiful Luciano del Santi.

The paths of Richard Maxwell and Luciano cross by chance one dark night and a friendship is born. But while, on the surface, Luciano merely operates his business from Cheapside, he actually has a much darker purpose; that of learning the truth behind his father's execution. This, with the country becoming a battlefield is difficult - but it is not Luciano's only problem. Soon, he also begins to realise that unless he is extremely lucky his quest will cost him his life.

His own safety and that of everyone he cares about rests on success. Only this will allow him to reclaim the Black Madonna and offer his heart to the girl he loves.

From the machinations within Parliament to the last days of the King's cause, The Black Madonna is an epic saga of passion and intrigue at a time when England was lost in a dark and bloody conflict.

Wonderful … that’s the only way I can start this review of Stella Riley’s latest novel, The Black Madonna, the first of a series covering the whole of the English Civil War.
I read it when first published in the late 1980’s but, thanks to e-publishing, Stella Riley has decided to not only upload her works onto the Internet but more importantly revise and amend them - with excellent results.
I make no apologies for saying this but, to me, Stella Riley is one of the best and most underrated novelists currently writing, not only English Civil War books, but also Georgian novels.
From the moment I started reading the prologue set in Vittorio Falcieri’s villa, Genoa I fell in love once again with the book’s leading man, Luciano Del Santi - a master-goldsmith and money-lender. Handsome, elegant, delightful, clever, articulate, cunning … ladies, he has it all and more.
Thereafter, Stella starts her tale of revenge and pursuit – made possible by the Black Madonna, a small statue of carved obsidian which, as Luciano states, ‘has no intrinsic value’ but is of vast sentimental worth to both him and his wealthy Genoese uncle.
The book begins in 1639 and the setting is England on the brink of Civil War. The country is in turmoil and rumour and counter-rumour abound. Families are at odds with each other; father to sons; mothers to daughters; brothers to sisters.
In the Commons sits Richard Maxwell, observing the proceedings and recognising that the disputes between the King and John Pym are now reaching apocalyptic proportions and war is inevitable.
We travel from 1639 through to 1642 and see, again through Richard Maxwell’s eyes, that wonderful moment of sheer historical theatre when the King enters the House of Commons on 5 January to arrest the five members of parliament Pym, Hampden, Haselrig, Strode and Holles and, reaching William Lenthall, says ‘Mr Speaker … I must for a time make bold with your chair.’ Magical and timeless.
However, while parliament is having its dramas, back at Thorne Ash, the home of the Maxwell’s, Richard’s wife Dorothy and his daughter Kate are having their own battle with the local Royalist garrison based in Banbury. And it’s here where we first meet Kate Maxwell, described as … ‘a spirited red-head’, who is more than equal to the various challenges that come her way and vows to hold Thorne Ash against both Cavalier and Roundhead.
Set against this background we meet Luciano del Santi - along with his excellent body guard Selim and his comical factotum, Giacomo. Once introduced into the Maxwell household, the romance between Luciano and Kate begins slowly and though it is rocky at first, the outcome is never in doubt. Now the quest to find the Black Madonna and seek revenge for the person who had his father accused of treason and summarily executed is in full swing.
Covering a span of 5 years with the various twist and turns that keep you guessing as to the identity of the villain, I found the story line compelling and interesting. This is particularly important because while the quest is developing, so is the War, which Stella Riley weaves into the quest seamlessly. We have romance and death. We observe battles and skirmishes; assassination attempts; arson and political intrigue. It’s all there in a sumptuously crafted piece of true theatre.
However, the most important thing throughout this excellent book is the typical Stella Riley style. She writes of people who you can truly believe. We hear them speak; share their secrets; observe their fears; understand their feelings and watch them fall in love. She deals adroitly and articulately with the complex issues of how and why the Civil War began and how it came to one of the most horrific scenes of the whole War, the siege and destruction of Basing House in 1645. This was when Parliament had little sympathy for those they perceived to be Catholic and killed about a quarter of the 400 members of the garrison, including ten priests.
She quotes the words of those that lived and intertwines them with her own deliciously created characters. But more than that she writes with passion and true feeling of how ordinary people must have felt during one of the greatest changes this nation has ever faced - and which has shaped Englad today.
I make no apologies for saying that The Black Madonna is one of the best historical works of fiction I have read. I can only congratulate the author on her work and, if you read this review, I wholeheartedly recommend it to you and your friends. It is simply wonderful. Thank you Stella Riley and I look forward to the next instalment in the series, Garland of Straw.