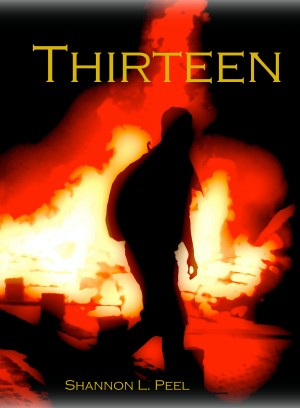 Becoming a teenager is a confusing time filled with personal battles and outside ones, Jack’s life is no different. As he enters high school he reinvents himself to be ‘cool’, until survival becomes a priority, then he is forced to become who he really is. Thirteen is a roller coaster of twists and turns.

Shannon Peel grew up in Enderby, BC where her family's root run deep. Growing up where television was either non existent or very limited she relied on books & imagination to travel into the world beyond.

She went to UBC to study and earn a general studies BA with a concentration in Political Science and Economics. Macro analysis of world events, social justice and human motivations became a passion of hers. This passion is a driving force in all her stories, which have political, economic, and social justice undercurrents.

After a career in the financial field she decided to stay home and raise her two children until school age. In 2007 she return to the workforce as a sales / marketing / advertising professional.

Reviews of Thirteen by Shannon Peel

This book was absolutely amazing!

My favorite part is when Jack and his mom safely pass the checkpoint with Nick and Kim because they are relatively safe.

My favorite character is Jack's mom because she is brave and never gives up. She protects Jack with her own life.

Wow, this book really hooked me, typical 13-year-old who rebels at most things especially his mother! He hates the fact that his dad has left and blames his mother, it is all her fault. Jack Sullivan thinks his mother is too strict, her rules suck big time, she always wants to spoil his fun. Typical of a boy his age, he just wants to have fun and hang with his friends, but his mother seems to always interfere, he just does not realise she is caring for him and loving him like a mother should, perhaps over-protective at times but she does have his safety as her main priority.

This story is aimed at teenagers, but to be honest I did not find that made it "too childish" for an adult to read like some teen stories do. I actually was really impressed with the Author's ability to make it enjoyable even for adults. I loved how Jack was a bit of a jack the lad at times, and at others a totally kind and caring boy, who thought of others before himself.

The story is set in Canada, and it soon becomes clear that a grounding from his mother is nothing at all compared to the things that are about to happen. People are used to having freedom and coming and going as they pleased but what happens when that is suddenly halted, invaded by another Country's soldiers and you are a prisoner in your own home, limited food, no utilities, no tv, no radio, no LAPTOP omg how does a child survive this? Jack and his mother set out to make sure they do survive, they follow the orders given to them, but they also do things they are not allowed to do even though they know the punishment would be horrific.

An absolutely lovely story, the characters are so believable. It is action packed and I really enjoyed it, in fact, I even forgot that it was a teen story I was more in awe of how Jack handled the situations thrown at him.

Thirteen year old Jack Sullivan resents living with his mom's rules. He feels she's restricting his freedom (typical teen) and just wants to be left alone to have fun with his friends. Waking up to the sound of gunfire one morning, Jack soon has a lot more to worry about than being grounded. Soon he is helping devise ways to stop his neighbours becoming desperate for basic needs and worrying about his dad.

Looking at the front cover of "Thirteen", I can safely say that cover art is definitely not a priority for me when I choose a book. I'm not sure it would even attract the target audience, but the plot for the story sure will.
When I started reading "Thirteen" I had to remember to keep in mind that it is targeted at a much younger age group and it shows in how it is written. I kept thinking it needed to be spiced up but that's my adult thinking. In reality, for a 10 - 14 year old boy, it is just right.

Shannon Peel has come up with a great plot, one that young boys/teens would be interested in. I was certainly interested in it, and I'd like to think that I would be willing to help out wherever necessary in a situation like that. Each chapter was very well written, again, remembering the target audience. I really felt for Jack. I also really felt for his mom, as being a mother myself, I know how strong willed young boys can be and how hard of a job it is to protect them without suffocating the poor child.

"Thirteen": a book for kids with a simplified adult storyline. I will definitely be recommending this book to my thirteen year old son.
I was asked to review "Thirteen" in exchange for an honest review.

You have subscribed to alerts for Shannon Peel.

You have been added to Shannon Peel's favorite list.

You can also sign-up to receive email notifications whenever Shannon Peel releases a new book.