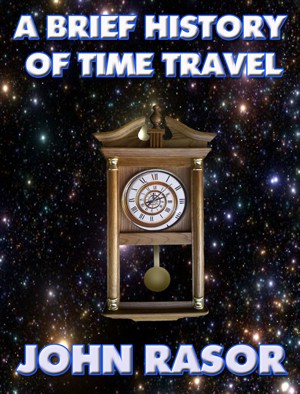 A Brief History of Time Travel

I've been writing for 20 years or more. I read a lot when I was younger and one day said to myself, "Hey, I can do that!” And I believe that I can.
My first published book is a novel, Roadkill. It’s a serial killer thriller about a man who has lost his wife and unborn child because of a careless driver on her cellphone. Feeling he has been wronged by fate, and longing for revenge, he proceeds to wreak havoc on drivers using cellphones throughout Los Angeles and Orange County. The book follows both the killer and the police who are searching for him – with a lot of help from some motorcycle process servers along the way.
My second published book is non-fiction, How Lost Got Lost, and is my take on the TV series Lost and how it failed its fans in the end with the worst ending to a TV series of all time.
I have just published my third book - inspired by the TV show Fringe – which had an ending as wonderful as Lost’s was bad. The new book is called A Brief History of Time Travel. Despite its title, it is a comprehensive look at literary time travel over the last century and more. The book reminds us all of many fascinating tales from books, movies and on TV; what was good about them, and what didn’t work. The book also explains the rules of literary time travel and discusses the physics and concepts involved. The book also has a humorous side, because, let's face it – time travel in the real world has been deemed impossible by the likes of Albert Einstein and Stephen Hawking. Time travel enthusiasts should find this book quite informative and – as Mr. Spock might say – fascinating.
I have also written two other books which haven't as yet been published. Confessions of a Hollywood Messenger is about all the wonderful things I saw on the amazing job I was forced to take when I was perceived as "too old" to continue my career in manufacturing and aerospace. My second as-yet-unpublished book was a novel, The Meter-Maid Murders. It revolves around the parking police in Los Angeles, and the killer who is stalking and killing them.
I love to chat on the Internet about Lost, Fringe, time travel and like subjects. I also love pro football, and have been a staunch Arizona Cardinals fan since moving to Arizona in 2006 to be near my kids and grandkids.

You have subscribed to alerts for John Rasor.

You have been added to John Rasor's favorite list.

You can also sign-up to receive email notifications whenever John Rasor releases a new book.