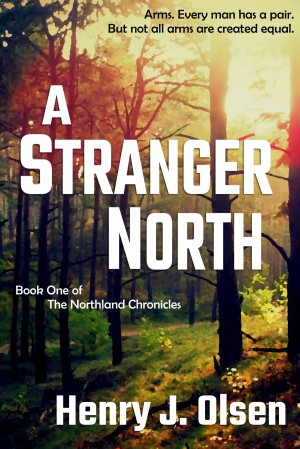 By Henry J. Olsen
Nine years ago the Desolation laid waste to humankind, leaving only scattered pockets of civilization in its wake. Now John Osborne drifts through the remains of the North, his only companion the six-shooter at his side. More
Arms. Every man has a pair. But not all arms are created equal.

Nine years ago the Desolation laid waste to humankind, leaving only scattered pockets of civilization in its wake. Now John Osborne drifts through the ravaged remains of the North, his only companion the six-shooter at his side.

When a young girl finds John unconscious in the northern Minnesota wilderness, she urges her village to help him. But while John is still bed-ridden, the girl inexplicably vanishes. Recognizing that the disappearance is no mere coincidence, John takes it upon himself to find and bring her back safely.

Hear about new releases first. Sign up for my newsletter at http://simplyunbound.com/mailing-list/

My life started on January 1st, 1986. I was the second child born in Madison, Wisconsin that year. My mom has never let me forget that there was no prize for second place.

In 2004 I enrolled at the University of Minnesota. A dumpster full of broken calculators and semester in Tokyo later, I graduated with a degree in Mathematics and Japanese.

Fresh out of school and thirsty for adventure, I accepted a contract to teach in South Korea. Three years of Kim Jong-il's threats to plunge Seoul into a sea of flame quenched that thirst. I returned home with only a suitcase full of kimchi and a dream.

That dream was to write.

I holed up in my bedroom and wrote furiously. After aborting my first attempts at a novel, I began work on what would become The Northland Chronicles. Nine months later I released A Stranger North. I've been writing and publishing ever since.

Also in Series: The Northland Chronicles

Reviews of A Stranger North by Henry J. Olsen

You have subscribed to Smashwords Alerts new release notifications for Henry J. Olsen.

You have been added to Henry J. Olsen's favorite list.

You can also sign-up to receive email notifications whenever Henry J. Olsen releases a new book.