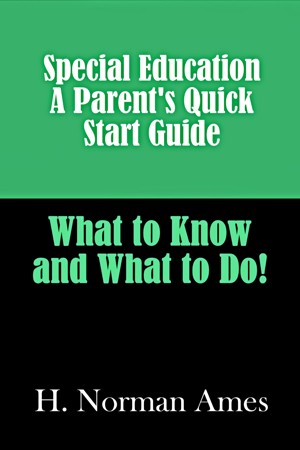 This Quick-Start Guide will give parents and others the basics of special education, including information about the Evaluation Process, Individualized Education Plan (IEP) process, as well as helpful hints and recommendations for parents as they struggle to navigate the often complicated and scary roads to helping their child receive the services they need. A Parent's Quick-Start Guide will help parents have more confidence and assurance in the process.

Norman Ames began his professional career as a school psychologist, working in the states of Utah and Washington. Norman went on to become an administrator and Director of Special Education in public schools in central Washington where he built a strong reputation as an advocate for students while also administering special education programs that were effective, efficient, legally compliant, and fair. Most recently Norman is working as a Technical Assistance Provider and consultant in special education providing support to states in helping them to implement highly effective programs for students with disabilities.

Norman graduated from the School Psychology program at Utah State University in 1996. Prior to that Norm served in the Army as a Medical Service Corps Officer, including service during Operation Desert Storm in Saudi Arabia and Iraq. Norman has served on the board of directors for a Residential Services agency for adults with disabilities in Washington and has been an active advocate for people with disabilities for over 20 years.

Norm and his wife have four boys including a 15 year old with autism.

You have subscribed to alerts for Norman Ames.

You have been added to Norman Ames's favorite list.

You can also sign-up to receive email notifications whenever Norman Ames releases a new book.