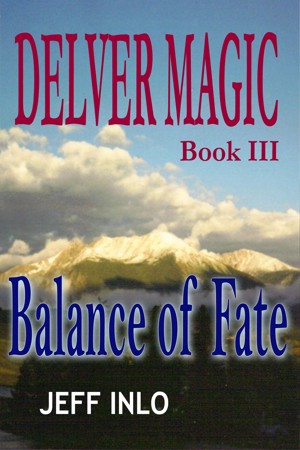 By Jeff Inlo
Rated 4.20/5 based on 5 reviews
Ryson Acumen finds that his time of service to the land of Uton is not yet complete. Together with Holli Brances and Lief Woodson, they must work together once more to end a growing threat and to meet their own undeniable destinies. It is not without loss or sacrifice as they struggle to battle grotesque forces of malevolence. Enemies once forgotten return to hold sway over each ensuing conflict.
Download: epub mobi (Kindle) pdf more Online Reader
rtf lrf pdb txt
Price: Free! USD
Add to Library
Create Widget
Tags: fantasy inlo delver delver magic fantasy action
About Jeff Inlo

Jeff Inlo lives in New Jersey with his wife, Joan. He studied Finance and Accounting in college. While he still enjoys working with numbers, he finds it rewarding to create stories with encouraging messages and admirable characters. He has written over a dozen novels, including several books in the Delver Magic series.

4 species of equal intellectual life find ways to work together against evil that threatens all. it has some problems that better proof reading or perhaps formatting might correct. Otherwise, I found it a very good read.

Probably one of the lesser-quality series' I've read in a while. The delver people are never really explained in any detail. All we know is that they can move very fast and have an unnatural aversion to killing for any reason. They don't mind letting you go your merry way, knowing full well that you'll slaughter hundreds of innocents as soon as you find them, but they refuse to kill you and will actively seek to stop others from killing you. That was odd.

I found it particularly disconcerting that the majority of the deaths in the first few books were directly attributable to the Delver character refusing to kill the bad guy when he had him. Even with the bad guy standing on the corpses of slain humans, the delver found some convoluted reasoning for not taking his life. And then he complains that others (like the elves, dwarves and wizard) do something about the problem. Well, delver, if you had killed the bad guy any of the dozen or so times you found him, there wouldn't be this problem.

I kept reading the story, waiting for that moment of understanding to come to him, but it never did and I had to quit the series in frustration. I understand the need for an antagonist, but couldn't get over the fact that the real bad guy in the story was the one being touted as the hero! It was by his lack of action that the goblins were able to kill innocent farm kids. He did nothing and was allowing evil to triumph because he had some "high and mighty" belief system that couldn't be swayed. Better a thousand humans be slaughtered and enslaved than the delver actually use his abilities to stop it.

That certainly isn't the kind of "morality" I want to read about. The goblins were portrayed as absolute evil with the singular goal of destroying and/or enslaving all the other races on the planet. Okay. You don't let those kinds of people just walk away because they're going to come back. You're not going to teach them a lesson, have them see the error of their ways, and everyone lives happily ever after. As we saw in the first few books, hundreds of humans, elves and dwarves were killed by goblin attacks..... and the head bad guy that's organizing the whole thing was let go by the delver several times. That's a hero? Then we get to listen to the "hero" whine and cry that the wizard won't do something about it?

Balance of Fate has me only worried that Mr. Inlo will not follow up on the Delver series. It was such a good ending to the first two in the series, but...I need more of these characters floating in my mind. So many questions about their futures. Do Rysom and Linda have children? Who will they take after, what that combination bring about in a child? How will Uton's races settle in their prospective futures? What about the Dwarves and the Elves? Do the Algors still hold to their animostity? Give me more Mr. Inlo!!! If you could write as fast as I can read I would be one happy follower. Thanks for sharing your brilliance.

You know, I've read quite a few self published authors and consider Mr. Inlow's books to be quite well written - top 10% easily. Just some minor editing and proofreading and the books become mainstream favorites.

I think there is another series here or may two more. I'll wait patiently for the next ones. For new readers to the series, you will enjoy a unique story with interesting characters. I would have liked a little more depth to the characters, and hope the next books dig just a little deeper.

Overall, a good series, and I always looked forward to picking up my Kindle to see where the story was going to take me next.

Having read the 3 book series I have to say I enjoyed it very much and hate to see it end. Maybe there will be a book 4?

Thank You Jeff for these books.

You have subscribed to alerts for Jeff Inlo.

You have been added to Jeff Inlo's favorite list.

You can also sign-up to receive email notifications whenever Jeff Inlo releases a new book.