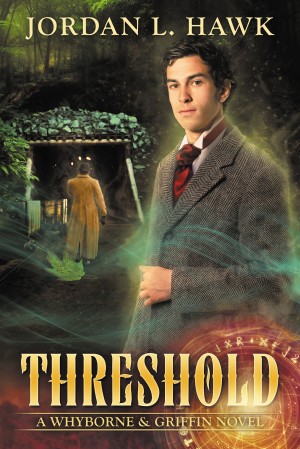 Rated 5.00/5 based on 2 reviews
Can reclusive scholar Percival Endicott Whyborne and his lover, ex-Pinkerton detective Griffin Flaherty, defeat the otherworldly forces behind the sinister disappearances at a coal mine? More
Introverted scholar Percival Endicott Whyborne wants nothing more than a quiet life with his lover, private detective Griffin Flaherty. Unfortunately, Whyborne’s railroad tycoon father has other ideas: namely hiring Griffin to investigate mysterious events at a coal mine.

Whyborne, Griffin, and their friend Christine travel to Threshold Mountain, a place of dark legend long before the mine burrowed into its heart. A contingent of Pinkertons—including Griffin’s ex-lover Elliot—already guard the mine. But Griffin knows better than anyone just how unprepared the detectives are to face the otherworldly forces threatening them.

Soon, Whyborne and Griffin are on the trail of mysterious disappearances, deadly accidents, and terrible secrets. Is Elliot an ally, or does he want to rekindle his relationship with Griffin? And how can Whyborne possibly hope to compete with the stunningly handsome Pinkerton—especially when Griffin is hiding secrets about his past?

For in a town where friends become enemies and horror lurks behind a human mask, Whyborne can’t afford to trust anything—including his own heart.

The second book in the "Whyborne & Griffin" series. The titular couple untertakes a journey out of Widdershins on a case they are reluctant to pursue. The lovecraftian elements take more of a backseat this time, while the era of pioneers and exploration of US moves into the foreground. Whybornes stuffiness, worth of a true english gentleman of a victorian era, takes up a notch, to balance out the ingredients to the success formula of the first book. Personally, I liked having a more US-flavored version of the story, so to speak, I have read enough bad Sherlock Holmes/Victoriana pastiches and as they are numerous, they are also mostly unsatisfying. It comes at a price of having Whyborne need to work somewhere completely opposite of his comfort zone, and seething with jealousy as another roadblock, so for a long stretch it is the story is somewhat flabbergasting as to where is it going. On the other hand, I imagine, it is true to how flabbergasted the characters must have felt, confronted with this particular mystery. I feel like I would have needed at least another 50 pages worth of background information, like, what were these creatures? were they truly defeated or was it just a temporary setback? what about the pictogramms, didn't anyone think it might be prudent to go back and try copy them, in case something similar happened again? what happened to the surviving miners? was the altercation with Fenton all there is as a resolution to Whybornes conflict with his father? So I am actually a bit on the fence about the sequel, because I actually liked it even more than the first one, but it also feels less like a complete novel than the first one, so I will stay with the five stars. The deeper characterisation alone is a worthy read, since we get more insight into Griffins background and what pitfalls lie hidden behind his suave worldly persona, and see Whyborne grow more as a person he aspires to be, despite being plagued by his own insecurities.

Jordan L. Hawk has delivered another gem. I adored this book and characters enormously. Every element of this story pushes my “yes!” buttons. Threshold contains compelling, intelligent – yet conflicted – protags, heart wrenching surprises, a vivid atmosphere, wicked awesome “what the hell?” creatures, and jaw dropping action. Combine all that with excellent character growth, perfectly delivered humor (I lost count of my laugh out loud moments), interesting social commentary, a disconcerted hero, a passionate love affair, and it adds up to: I’m freaking in love with Whyborne & Griffin and their adventurous tale. ♥