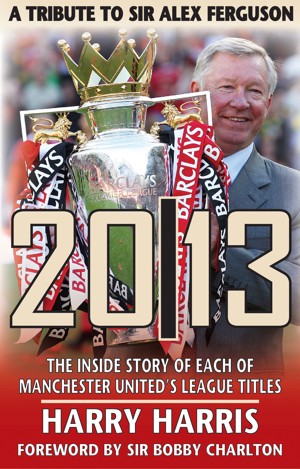 HARRY HARRIS has won almost as many awards as Sir Alex Ferguson has won trophies. He has actually written more books than Sir Alex has won silverware! Harry is a Double winner of the prestigious British Sports Journalist of the Year award and the only specialist football writer to win the coveted British Variety Club of Great Britain Silver Heart for ‘Contribution to Sports Journalism’. He is also a double winner of the Sports Story of the Year award, Harry is also the only journalist ever to win the Sports Story of the Year accolade twice, he has also been runner-up several times.
Harry is arguably the most prolific writer of best selling football books of his generation. Among his 65 titles are the highly acclaimed best seller Pele - His Life and Times, plus all The Way Jose, Chelsea Century, and a number of Manchester United books. Harry was also the last journalist to interview George Best for his fi nal book, ‘Hard Tackles & Dirty Baths’. He has also penned The Ferguson Way and Wayne Rooney -The Story of Football's Wonder Kid. Harry has also written a series of autobiographies for Ruud Gullit, Paul Merson, Glenn Hoddle, Gary Mabbutt, Steve McMahon, Terry Neill, and of course, Bill Nicholson.

You have subscribed to alerts for Harry Harris.

You have been added to Harry Harris's favorite list.

You can also sign-up to receive email notifications whenever Harry Harris releases a new book.