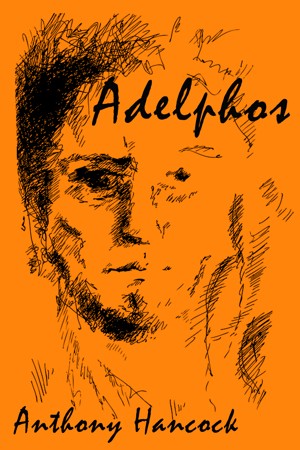 By Anthony Hancock
Set in 1962-3 against the background of an upbringing spanning the North Atlantic, Adelphos is the story of Beccles Ede in his final-year of General Arts at university in Montreal, Canada. Fuelled by a potent cocktail of dark fraternity politics and a first freefall into love and sex, Beccles’ last months as a student turn increasingly turbulent. Will they end in tragedy?.... More
Adelphos is the story of a growing personal crisis enveloping Beccles Ede, a final-year student in General Arts at a Montreal university in the winter of 1962-3. Haunted by memories of his Olde-Worlde childhood and schooling – he emigrated to Canada as a thirteen-year-old – and of his struggle through his teens to win acceptance by his New-World peers, Beccles is disillusioned with the university and dubious about the career in the city he sees it preparing him for. As the story opens, however, he’s transformed by a romantic liaison he’s recently struck up with the feisty Cassandra Roberts, a white student from Jamaica. She may only have cost him a pint of blood – as he tells himself soon after he meets her at a campus donor drive – but it is the roller-coaster relationship he forms with her, in conjunction with his membership of Gamma Chi, a campus fraternity with its mystic rituals and dark internal politics and its close association with the ruthless world of city business and finance that he fears awaits him, which forms the basis of the story and drives it to its climax.

Adelphos is a historical novel aimed at the reader who enjoys descriptive writing and a steadily-evolving story-line featuring different strands interweaving fact and fantasy. Exposing the social and moral ethos of the fifties and early sixties, it will be attractive to readers familiar with that era on both sides of the Atlantic. The current relevance of its sub-themes, however – the struggle to emerge from a sheltered single-parent childhood, loyalty and betrayal in peer relationships, the search for self-expression in an oppressively conformist and materialistic society, and the confusion which comes from being born into one world and struggling for identity in another – mean that Adelphos will also appeal to a wider readership.

Born in 1943, Anthony Hancock grew up in Birmingham, England, and Montreal, Canada. Finishing university in 1964 and drawn by the lure of the road less travelled, he set himself up as a nomad English teacher in foreign parts. He began in a village on the Greek island of Chios in 1966, and went on to work in North Africa, in the Middle- and Far-East as well as back in the UK for brief periods. Following an MA in Applied Linguistics in 1984, he had lectureships in English Language and Business Communication at the University of Reading, England, and the National University of Singapore. Now retired he lives in Spain, where his interests are mountains and red wine and talking about cricket. Married with two grown children, Adelphos is his first novel.

You have subscribed to alerts for Anthony Hancock.

You have been added to Anthony Hancock's favorite list.

You can also sign-up to receive email notifications whenever Anthony Hancock releases a new book.