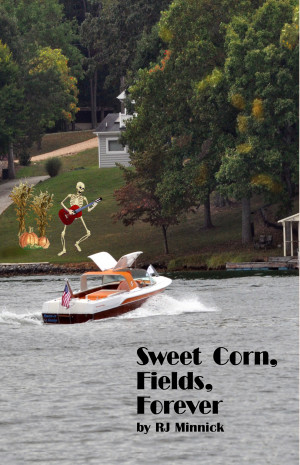 By R.J. Minnick
When Jason Fields and Mackenzie Wilder discover the body of a country musician in a conference room of Jason's Research and Design facility, the authorities presume Jason is at fault. Especially when they overhear him say the dead man is the reason he doesn't write country songs any more. They have to stop the killing, but will it cost them more than the diamonds on a country singer's costume? More
Country Music tours North…..

“Sometimes a new beginning is someone else's end,
a circular relationship where time begins to blend,
You have to ask the question: where have we come, and how?
'Cause the end's in the beginning,
And the beginning's in us now”

-- from “The End’s in the Beginning” by Tyler McCloud

Jason Fields is opening his new research and design facility with a grand Open House. Before the event begins, he gives Dr. Mackenzie Wilder a personal tour -- which puts an early end to the festivities. They discover the body of country musician Tyler McCloud, strangled in a first floor conference room.

They're sure they didn't have anything to do with his death, but Jason's past involvement with country music and this particular family lead authorities to think otherwise. It takes Mackenzie Wilder's faith in her friend and the staunch support of Tyler's sister Tory to uncover "what Tyler did to get hisself killed." From upstate New York to Charlotte, North Carolina, from Las Vegas to Nashville, the deaths and confusion mount.

Could Tory be at the center of it all? This may be one song she can't sing or write her way out of. It will take their combined resources to stop the killing, at a cost far higher than the diamonds on a country singer's costume.
Available ebook formats: epub mobi pdf lrf pdb txt html
First 15% Sample: epub mobi (Kindle) lrf more Online Reader
pdb
Price: $2.99 USD
Buy Add to Library Give as a Gift
How gifting works
Create Widget
Tags: murder mystery cozy mystery antique boats chris craft classic boats country music mystery hacker craft vintage boats
About R.J. Minnick

R.J. MINNICK has spent a lifetime working at various jobs (she even sold Fuller Brush!) and another lifetime raising six terrific offspring with her husband. During both those lifetimes she kept writing - poetry, reviews, short stories, nonfiction, mysteries, mainstream novels, and Christmas epics. She has credentials in national and local magazines and community news publications.
Where the Bodies Lie Buried is her first mystery, and the first in her Mackenzie Wilder/Classic Boat mystery series.

She grew up the youngest of five girls in upstate New York, then lived in Maryland and Vermont before settling in Nashville, Tennessee where her family spent 24 years before moving to North Carolina. With her children now adults, she has moved from being a full-time mom to being the family's on-call consulting guru. She is also a part-time Parish Administrator and occasional web designer.

For 16 of the years they lived in Nashville, RJ coached writing in their children’s schools. She now continues working with people who love to write by being part of a writer's group and by helping with local writing workshops.

She writes for a local magazine, ARRAY, but her fiction work is currently focused on novels.

R.J. Minnick lives in Fayetteville, North Carolina with her husband, two dogs, five cats and - from time to time - a child or two.

You have subscribed to Smashwords Alerts new release notifications for R.J. Minnick.

You have been added to R.J. Minnick's favorite list.

You can also sign-up to receive email notifications whenever R.J. Minnick releases a new book.