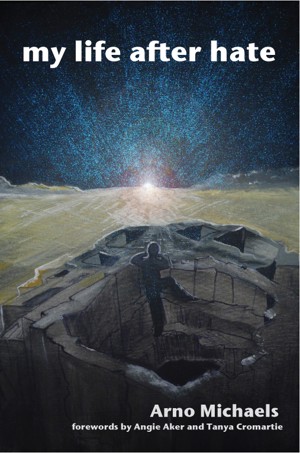 My Life After Hate

By Arno Michaelis
A former racist skinhead examines his past: How did a teenaged alcoholic become a central figure in the white power movement of the early 90s? What happened to bring about his drastic change of heart? With a collection of reflective essays, disturbing flashbacks, and an interview, My Life After Hate scrubs scabs off the wound of racism, then soothes with the essential wisdom of compassion.

From the time I was 17 until I was was 24, I was a substantial part of the white power movement. I was a founding member of what went on to become the largest racist skinhead organization on Earth, a Reverend of a self-declared Racial Holy War, and lead singer of the race-metal band Centurion, selling over 20,000 CDs of the most violent, hateful music ever made around the world. There is blood from innocent people on my hands that will never wash off. There are kids today who listen to my voice bellowing my lyrics as they're getting drunk and geared-up to go out and hurt people.

After 7 years of involvement, the combination of single parenthood and higher education finally instilled enough doubt in the racist dogma that I had vehemently promoted for so long to allow sight beyond the narrow view I clung to. There was one particular afternoon that marked my epiphany:

I arrived early to pick my daughter up from daycare. No one had noticed me, so I took in the moment, watching with teared eyes as my little girl played with the other kids. It struck me that they were all children; not black children, or white children, but the sons and daughters of mothers and fathers. I thought of all the people I had hurt, whether with my own hands or by lighting some psychopath's fuse. Those people had moms and dads and brothers and sisters. How did their loved ones feel when they saw this person who was so special to them battered and broken? How horrible would it be to have my daughter exposed to such violence in the slightest aspect? Love for my child thawed a dormant empathy for people that I was never aware of.

I have changed drastically over the years since then, becoming a person who seeks out and embraces the diversity of our wonderful human family. A person who ultimately realized that basic human needs -air, water, food, hope, and love -transcend race. I didn't become this person with the intention of simply being the antithesis of what I was. It happened very organically once I became too exhausted to maintain the lies necessary to be a racist.

Today I work with an amazing group of friends to publish Life After Hate, a monthly online magazine dedicated to basic human goodness, which is the innate and natural desire to live an open and honest life while treating all other life with compassion and respect. This core truth serves as the foundation for peace as it’s common to every world religion and transcending of ethnicity, nationality, sexuality, and any other sort of difference that seems to sort human beings.

You have subscribed to alerts for Arno Michaelis.

You have been added to Arno Michaelis's favorite list.

You can also sign-up to receive email notifications whenever Arno Michaelis releases a new book.