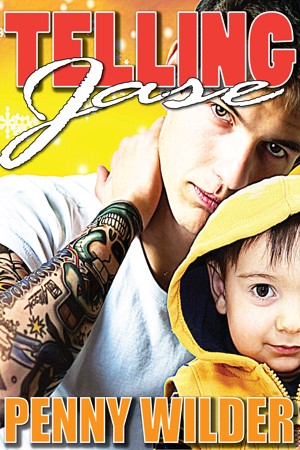 Rated 4.86/5 based on 7 reviews
TELLING JASE tells the story of Sean Taggert, aka Tag, who has been in love with his best friend and former college roommate Jase Shaw for the last two years and nine months. He’s never told Jase how he feels, though. There were always other people in the way. Until now...

This story was written as a part of the M/M Romance Group on Goodreads 'Love is Always Write' event. More
TELLING JASE tells the story of Sean Taggert, aka Tag, who has been in love with his best friend and former college roommate Jase Shaw for the last two years and nine months. He’s never told Jase how he feels, though. There were always other people in the way. Up until six months ago, Jase was shacked up with his cheating college boyfriend Marcus. Up until last night, Sean was engaged to the mother of his two-year old child, Cody. Cody may have been the result of a drunken one-night stand, but Sean would do anything for his son, including marry a woman he doesn't love. But when Sean’s fiancée Lisa, calls him from her New York vacation to say that she’s left him and Cody for good, Sean calls Jase, the only person he knows who can get him though this. Now that they are both free, maybe it’s finally time for Sean to tell Jase how he really feels.

Penny Wilder is a queer human who writes and reads far too many books. She lives near Minneapolis, Minnesota with her husband and four cats. Her favorite thing to do at the end of a very long day is to curl up with her tablet and read. She does bookkeeping for nonprofits by day, and by night moonlights as a blogger, artist, illustrator, actor, director, performer, and also sometimes as a business manager for a fledgling theater company. (Not all at once though, because that would be crazy!) She has spent a good deal of her life working in theater; either onstage as a performer, or backstage doing just about every job imaginable. Her love of writing dates back almost as far as her love of reading.

Jase grinned, “you were about to tell me why you always hated Marcus?”
Sean closed his eyes. Truth, he reminded himself. He took a few deep breaths. “I envied him, Jase.”
“What? Why?”
Truth, truth, truth. “Because he got to have you, and I didn’t. Because I wanted you. I wanted to be with you. Jase, I… I think I still want that.”
Sean “Tag” Taggert’s fiancee abandoning him and their son, Cody, is a blessing in disguise. Sean had never loved her and only committed to her for Cody’s sake. He was really in love with his best friend and former college roommate Jase, and now he might have the chance to tell him that.
But there was just one problem. Jase didn’t know Sean was bisexual. And Sean had no idea how Jase would react to the news that he had been in love him for three years.
Jase is incredibly hot and I can see why Sean’s attracted to him. He’s sexy and dominant, but also sweet, and caring, and great with kids. Jase is always there for Sean and a good friend. And Jase is also very attracted to Sean. There is no question at all about that.
And damn, they have good chemistry between them. Their relationship isn’t forced or fake at all.
Jase pulled off his t-shirt and tossed in on a chair. Tag stared at him with hungry eyes, and pulled his shirt over his head as well. Jase bit his lip and held back a groan. Tag had more tattoos. There were at least three new ones that he could see, tribal patterns on each pec, and a dragon, low on his left stomach, that halfway disappeared beneath his drawstring pants.
Jase ended up hopping quickly into the bed, when the thought of following the dragon’s tail into Tag’s pants caused in him a very noticeable reaction.
Sean killed the light and climbed in next to him. He scooted over till his shoulder was pressed against Jase’s chest. Jase reached across Tag’s body and grabbed his hand. His forehead touched the side of Tag’s head. He smells like home, he thought. He squeezed Tag’s hand and whispered. “Nite, Tag.”
“Nite Jase.”
They are so cute together. Telling Jase is the perfect story to put you in a good mood.
But it’s not completely perfect. The beginning is awkward. Sean comes home early to hear Jase and his then-boyfriend having sex in their room and within a matter of minutes he knows for sure he’s bi and in love with Jase. Just because he got turned on by sex sounds. That felt forced and insta-love, even if most of the story doesn’t.
I also couldn’t picture Lisa as a real person at all. Even though we never actually see her in the story, she plays a huge part. Despite all of the time Sean and Jase spend talking about her and all the time Sean spends thinking about her, she remains an undeveloped plot device instead of a real character.
Despite those flaws, this story is worth 4 stars. It’s a quick, fun read that I highly recommend.

Sean impressed me. He's determined to do the right thing even when it means sacrificing him self. He jumps into fatherhood with no reservations and tries to make a go of a relationship with a woman he doesn't love for his son's sake. He isn't holding back the truth either. Once Jace arrives he confesses all. Jace is smart enough to take time to really digest what it would mean to commit to not only Sean but to his son Cody. I looking for more from this author.
Adult read

Great, loved it. will be looking for more from this author :)

Loved it, sweet, romantic and hot as hell.

You have subscribed to Smashwords Alerts new release notifications for Penny Wilder.

You have been added to Penny Wilder's favorite list.

You can also sign-up to receive email notifications whenever Penny Wilder releases a new book.