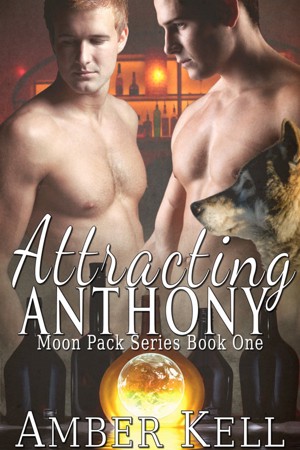 Silver, alpha leader of the Moon pack, has been searching for his mate for a long time. Unhappy with the men he meets he’s given up searching for the man of his dreams until Anthony walks into the bar.

Amber Kell is a dreamer who has been writing stories in her head for as long as she could remember.

She lives in Seattle with her husband, two sons, three cats and one very stupid dog. To learn more about her current books or works in progress, check out her blog at http://amberkell.wordpress.com.

Her fans can also reach her at amberkellwrites@gmail.com.

Not a bad start to the series, but I would have liked it to be longer. Due to the length the story was fast paced the whole way through and things were glossed over or just ignored.

I would have liked to explore Anthony's character a bit more. At times he was confident and then he turned to being unsure. He was happy being mated and wearing a collar but baulked at moving into together. He has an interesting heritage that could have been explored more, What did Silver make of it? maybe it will be in the following books.

If I dramatically suspend my disbelief I could call this a fun read. I didn't completely hate it, but the fact that I think the idea could have been something really good leaves me disappointed with what I read. The characters had no depth, even worse they were painfully cliché—the ultra dominant Alpha, the gorgeous twink (Can I say that as a straight woman? Hope so.), the hard-up BFF, the servile pack mates, the posh vampires, etc.

The plot was thin, at best. Alpha spots his destined mate, recognises him immediately by his smell and sets about claiming him (no room for plot development there). Said mate is hesitant but really wants to be dominated, too bad he happens to have so much power and wealth of his own. This is were there could have been an interesting inter/intrapersonal journey for the characters. Given another 100 pages or so this could have been developed into a rich and satisfying story. Instead it was rushed and blunt in its presentation. It essentially boiled down to a good pounding in bed, a pretty necklace, possessive demands and an inferred happily ever after. Meh!

I just didn't get it. The characters seemed totally driven by the story, with one guy declaring his independence and self reliance while allowing his wants to be totally disregarded. Not just submissive, but completely passive. I guess if all you need is supernatural creatures and rough sex, you'll like it. I didn't even manage to finish the 68 pages.

Short but intense and very sexy.

You have subscribed to alerts for Amber Kell.

You have been added to Amber Kell's favorite list.

You can also sign-up to receive email notifications whenever Amber Kell releases a new book.