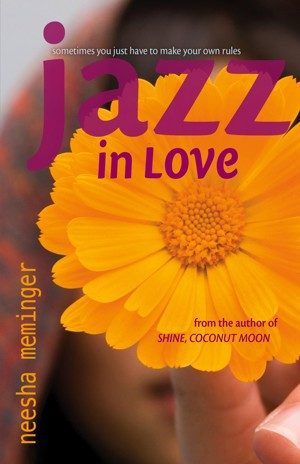 Neesha Meminger was born in Punjab, India, grew up in Toronto, Canada, and lived in New York City for 25 years. She currently divides her time between Toronto and NYC. Neesha holds a Bachelor's degree in Film and Media Studies from Ryerson University in Toronto, and a Master's degree in Creative Writing from The New School For Social Research in New York City. Her independent films have screened at international film festivals, she has taught literature and creative writing courses to undergraduate students in New York and Toronto, served as a board member for many arts and cultural organizations, and counseled women and youth in crisis. Visit Neesha's website for more information.

Reviews of Jazz in Love by Neesha Meminger

Likes: Jazz's character was totally relatable, despite being in a different culture and upbringing. How many people can relate to their parents being a bit unreasonable? With Jazz, her parents were ultra strict with their religion and culture guiding them in raising their daughter. It wasn't that they were being unreasonable, but there was a clash between their culture and the American culture.

The themes of this novel are also compelling. Making our own choices, our own mistakes is so important when you're a teenager (or a young adult like me). This is where things get complicated and the author makes this point by showing the conflict between Jazz in who she is, who she wants to be, and her parents expectations. None of us wants to let our parents down, but at the same time we all want to be our own person. Then there are some of us who are content following the plans our parents set us like Jazz's cousin, Kamaljit (Camel as Jazz calls her). The importance that the author sets out is that these are all choices, some of them are risky and others play it safe. The romance was understated towards the end, I was glad to know that it wasn't entirely predictable and while the ending was a little neat, it was completely wrapped up in a shiny bow if that makes sense. Sometimes we just need to be able to make choice, even if it may be the wrong one.

Dislikes: There's not much that I didn't like. I wanted to know more about Tyler R's family and why he decided to treat Jazz the way he did. Logically speaking, you'd think he'd go to her for help, but when are teenagers ever logical?

Overall: Once again, Neesha does it again. I love to learn about new cultures in this way. It sheds new light on some of the situations I encounter at school. I know some of my friends who discussed dating within the Indian culture and as Americans we were like "You can just stand up to your parents and choose who you want to date." And he said it himself, it isn't that easy for him to do. Reading this story helped me understand how hard it is any culture to date when you have strict parents. It was interesting to read the clashes between Indians from India and Indians from the West Indies and the caste system that still plays a role in the culture. I recommend this book for anyone looking to broaden their perspective with a culture they are not familiar with.

You have subscribed to alerts for Neesha Meminger.

You have been added to Neesha Meminger's favorite list.

You can also sign-up to receive email notifications whenever Neesha Meminger releases a new book.