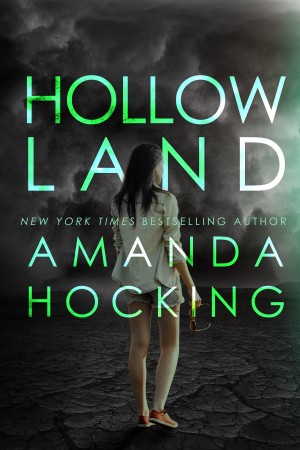 By Amanda Hocking
Rated 4.39/5 based on 23 reviews
"This is the way the world ends - not with a bang or a whimper, but with zombies breaking down the back door."

AMANDA HOCKING is the author of over twenty-five novels, including the New York Times bestselling Trylle Saga. Her love of pop culture and all things paranormal influence her writing. She spends her time in Minnesota, taking care of her menagerie of pets and working on her next book.

About the Series: The Hollows

"This is the way the world ends - not with a bang or a whimper, but with zombies breaking down the back door."

Nineteen-year-old Remy King is on a mission to get across the wasteland left of America, and nothing will stand in her way - not violent marauders, a spoiled rock star, or an army of flesh-eating zombies.

Also in Series: The Hollows

Reviews of Hollowland (The Hollows #1) by Amanda Hocking

Review
Hollowland Review by DeannaReads
Review By: peapodsa
My thoughts and opinions on the book Hollowland by Amanda Hocking.
L.E. Horn reviewed on Dec. 27, 2015

A great zombie romp with relatable characters and a pace that keeps readers engaged to the end.

Fairly awesome zombie apocalypse story with a kick-ass female lead. Remy encounters various entertaining effed-up things on her journey, and Hocking deals with gender issues in some interesting, subtle ways. I do wish that there were a little more explanation for Remy became such a bad-ass though, as the action starts on page one and never stops, and we don't hear much about life before zombies. But all told, this book was a lot of fun.

(reviewed the day of purchase)
Robert Zimmermann reviewed on Aug. 28, 2013

I was pleasantly surprised with this book. Over a year ago, I read Hocking’s Switched, which I enjoyed, but Hollowland was a step beyond on the enjoyment level. Hocking’s Hollowland was simply a great novel for its zombies, characters, and the world built inside it’s pages.

One thing I really liked about this book was that the author didn’t spare the reader from any of the gore or unpleasantness that occurs in a world where zombies and the destruction of civilization as we know it is the “norm.” In the scenes where zombies are attacking the main characters, there’s much description of how much blood, limbs, etc are flying around and breaking, and dying. Hocking makes sure the reader knows just what it’s like to encounter these creatures, like any good zombie book should. Some of the description of how the zombies’ bodies hold up to attacks are slightly repetitive, but it also drives the point across that these once human bodies have changed drastically because of the virus.

Remy, the narrator and main character, is one of the better characters I’ve read this year. She’s strong, determined, and rarely shows a sign of weakness, even if a love interest in introduced. She’s living in a world where survival is top priority and she doesn’t let anything get in her way of that. I found this to be a great part of the book. All of the characters were really well-written, actually. They were all developed over the course of the book and even a few that I didn’t like in the beginning, grew on me. Oh and Ripley, I want that to be a surprise, but she might be my favorite character in the book.

Upon finishing this book, I knew I’d want book 2. It’s not a common occurrence for me, either. It ended nicely and was set up for what I’m sure will be an exciting continuation. I can only hope that there’s more excitement, blood and gore, and danger in my reading future.

What I liked:
-The book starts off with some action, drawing you into the book.
-Lazlo. The love interest wasn’t the stereotypical badass that always had to save the heroine. He was actually kind of useless and only good for his sarcastic humor.
-Lazlo and Remy’s relationship. There wasn’t a case of insta-love. Remy is annoyed by him at first and considers him a burden, but he begins to grow on her after they go through some deadly experiences.
-There are some cool zombie killings, even if they are a little over the top for a teenage girl to handle.
-The ending. It was by far the best part of this book. Remy was so selfless and willing to make such a huge sacrifice for Max. it was probably my favorite part of the book.

What I disliked:
-Remy has a very easy time killing zombies. She survives many outrageous situations, all thanks to the training of a soldier. I could maybe buy her becoming proficient with a gun (I learned how to shoot fairly easily) but she was a bit of a cliché zombie killing badass.
-Ripley. I mean, it’s really cool to think of having a pet lion at the end of the world, and she’s named after one of my favorite fictional heroines, but this bothered me. Lions do not follow people around like pet dogs. They don’t come when they’re called.
-The cult. The whole thing was very cliché, especially with the circus tigers to guard the perimeter, and I thought it was unnecessary for the plot. Same with the marauders.

Absolutely loved this series. Well written and the story grabs hold of you. I read both books in days and plan to re-read them shortly. Well done! I only another book is in the works.

Absolutely adored Hollowland. The book itself flows from one place to another and gives you a whole other insight to the idea of a zombie apocalypse. It tells us a story of struggling to survive and that not everybody will make it through the world where mundane life ceases to matter and at the top of everybody'd priority list is staying alive and uninfected.

I've read quite a lot of Hocking's work (namely the My Blood Approves series and the Tryll Trilogy) and liked 'em, so I saw this one for free on Smashwords and thought I'd give it a shot...

By far, this is MY FAVORITE SERIES OF HOCKING'S and I feel it is her best written.

It was a lot tighter, succinct where it needed to be, and more eventful than MBA. And much more intense and gritty than Tryll. I feel like it is extremely underrated, since you hear a lot about her other books and hardly anything from this one! If you liked her other work, you will probably like this series even better. You can tell she has developed into a stronger writer and improved the pacing (which was a major con for me in MBA).
The book kinda says, I'm not going to lay it all out for you, you need to read between the lines a bit, which is so nice! It didn't try my patience and I was left to mull over a few parts that weren't completely transparent.
I only have a few qualms: I would have liked to see more of the character's internal thoughts, but then again Remmy is not the kind of person to dwell on the past. Also the relationship with Lazlo--I didn't feel there was a definite catalyst for them to be drawn to each other. Other little problems I had with it are just a result of being self-published I think, and with more extensive editing would have been addressed.

But that being said, I REALLY liked the story. Remmy is a bad-ass zombie killer and doesn't let her emotions get the better of her. She can't. She is a survivor and that means having to make tough choices that haunt her. But it is her love for her little brother, the only thing she has left in the world, that keeps her trekking across the country and braving the horrors of post-apocalyptic America till she finds him. On top of the obvious zombie run-ins, the people can be just as dangerous... if not more!
There are some awesome twists, a surprising revelation, and a cliff-hanger ending, but I won't give it all away. The great thing about this book is it feels like a real adventure. You will be surprised and find the unexpected at every turn.

I have already read the sequel Hollowmen too, which I liked EVEN MORE.

By far, my favorite series from Amanda Hocking! And probably my favorite zombie story ever.

This is a zombie apocalypse book, pure and simple. Remy is a teenage survivor is also a kickass zombie killer. A virus that turns people into zombies is ravaging the world, and the book opens, the zombies are attacking the quarantine where Remy is staying, and the people in charge have already evacuated her little brother to somewhere else. Now, she has to find him. That’s essentially the entire plot.

I felt I had to read Amanda Hocking because she’s an Indie author who’s made it. She’s sold millions of books, and naturally, I want to figure out her secret. I also heard she writes first drafts of books in 24 hours. I can’t fathom that any book written that fast could be good, as Truman Capote famously said, “That’s not writing. That’s typing.”

So it was with a great degree of skepticism that I picked up Hollowland (for free by the way on Smashwords!) It had a great first line that gave me hope:

“This is the way the world ends—not with a bang or a whimper, but with zombies breaking down the back door.”

And it was filled with action, but this is not a very deep book, and it’s riddled with problems both large (unbelievable plot elements, shallow characters) and small (typos, misused words.)

However, if you take the book as light, pulp fiction and can overlook real eye-rollers, it’s a lot of fun. I can’t recommend it highly because of all of the problems, but Hocking obviously has talent. She’s a natural born storyteller.

And now that she’s a millionaire with agents and editors at her disposal, I only hope she takes the time to hone her skill and give us some really great stories.

Amanda Hocking flys into the action. With a strong female protagonist whose role could easily and would have at one time been a male character. A mark ofgood writing is taking the unbelievable anfd making the reader become so involved that it makes it real.
I couldn't or didn't want to stop reading. The flow of action is maintained and there are no boggy bits. Its not literary fiction and at times I wished thete was more detail and reflection but ultimately I didn't care and found hollowland quite refreshing. All the zombies were individual in there states of varying decay and lazlo reminded me of cole from ths maggie steifvater shiver trilogy. He was nicer and less fleshed out but I appreciated the role reversal between the characters where Remy was the one saving him. I look forward to reading more of her writing.

You have subscribed to alerts for Amanda Hocking.

You have been added to Amanda Hocking's favorite list.

You can also sign-up to receive email notifications whenever Amanda Hocking releases a new book.