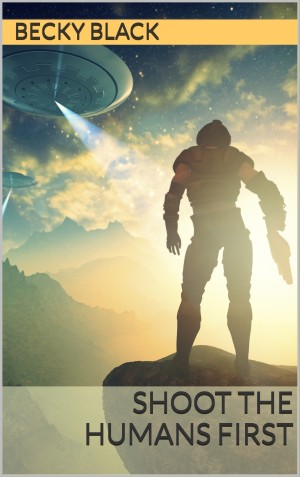 By Becky Black
Rated 5.00/5 based on 3 reviews
On Earth, everyone is a soldier. Like all humans Jadeth was trained from birth to kill. Humans are the best soldiers in the galaxy and they fight for whoever pays the most. With no family, no country, no tribe, their lives and their loyalty belong to High Command. But when Jadeth meets Ilyan, a man they call The Prophet, he learns he’s been lied to all his life. More
Brilliant intelligence analyst, Ilyan, is certain humanity and Earth itself is in imminent danger. High Command refuses to believe it, forcing Ilyan to go on the run, desperate to spread the truth. If he can’t make High Command believe in the threat, then he will take his message to the soldiers on the ground.

Infantryman Jadeth is one of those soldiers. He doesn’t know if it’s accident or fate that has brought him to Ilyan, but he knows he has only one mission now. He must protect Ilyan and his small band of followers as they travel through hostile territory, spreading the truth. High Command has betrayed humanity, and Jadeth has nothing left to believe in—except The Prophet. Ilyan is determined to reach Earth’s mercenary army, scattered across the galaxy fighting other people’s wars. His new guardian Jadeth must keep him safe from agents of High Command determined to silence him. If Jadeth fails he will have nothing left. If that happens Earth will learn how far a man can go when everything he believed in is lost.
Download: epub mobi (Kindle) pdf more Online Reader
lrf pdb txt
Price: Free! USD
Add to Library
Create Widget
Tags: rebellion 1st person futurisitic
About Becky Black

Writer of science fiction and romance.

What starts off as the story of an infantry sergeant realising that the allies are likely to blame the two surviving humans and kill them, and grabbing the opportunity to escape, slowly grows in scope. It starts (only starts, mind you) with treachery on a global scale and redemption on the micro scale. Deftly interwoven scenes build up background, of a species specialising in its USP, warriors for profit. The story remains grounded in the narrator's experience, with wry humour of the type: “No point in wasting time. I started to hate him immediately.”

And yet, it raises profound questions. This is no popcorn story where you can park your brain and heart and read. It's a full meal, though without dessert or salad.

(review of free book)
W. D. Smyth reviewed on Feb. 12, 2015
(no rating)
Way to sum up the suicidal trap of a homicidal profession. We really are our own worst enemy. After 'Shoot the Humans First' and 'The Battle of Hollow Jimmy', I think that the writing is simplistic, but the story is well worth reading. The occasional wry insight smooths the rough edges. Good work.

A description of what it is this creature called Human that will make you fell uplifted and ashamed.

The core premise is a good one. I'm uncertain whether it's been used before, though John Ringo uses something similar in his Posleen series. The writing is generally professional grade, though there are a few clinkers in the dialogue. But there are some problems in timing, characterization, and the overall theme, especially the way you chose to end the novel.

The opening is a good example of "in medias res" structure. It shows us Jadeth as a grizzled veteran who, if he's not bursting with pride over his occupation, at the least he's not ashamed of it. He knows himself well enough to know what he's good for, and to know the limits to which he can aspire.

However, we get into jags of timing as soon as Jadeth comes into contact with Ilyan's little group. Ilyan is too forthcoming too quickly. He's too intelligent, and knows far too much, to be as candid as he was with Jadeth, who might have been anyone from anywhere. Of course, that does underline the importance of Jadeth's later role as security chief. Maiga's hostility toward Jadeth isn't adequately grounded; she has no real reason to resent him...and she doesn't distrust him nearly enough.

Now, you could say that Ilyan's whole raison d'etre is exemplified in his candor toward Jadeth, but as an intelligence analyst he would have had caution and suspicion inculcated into his persona very early in his training. (I've "done time" in that community, so I know whereof I speak.) As for Maiga, we don't get enough background on her to grasp her motivations, her overall character, her attachment to Ilyan, her antipathy toward Jadeth, or her solicitude toward Tesla.

Tesla -- I do hope the ghost of Nikola Tesla, one of Mankind's great geniuses, doesn't mind your appropriation of his name -- is similarly too thin for his role. You depict him as a whiner, a weakling, and something of a coward. All very well...but the clash against where he is, what he's doing, and the risks he's elected to share with Ilyan is rather stark. There was a way to rationalize his choice to follow Ilyan on his campaign, but I shan't recommend it; it carries a lot of baggage most readers would prefer that you not tote along.

The ending of the novel, though striking and dramatic, is likely to leave a bad taste in many readers' mouths. But then, having depicted mankind as a mercenary species, and having depicted Jadeth as something akin to an avenging angel, perhaps you had no better way to conclude it. I'll have to put this on the shelf alongside various other dystopian and inevitable-damnation-and-doom conceptions. But there's no question that it is original.

Minor details:
1. Watch out for exclamation points. Editors call them "screamers." 95% of the time they're a bad mistake.
2. There are some typos and misspellings -- and no, I'm NOT talking about the use of British spelling.
3. No one determined to keep his captive alive would use electrical torture in a metal cage. The risk of death is far too great.

Now, I'm fully aware that I'm the toughest reviewer on SmashWords, so I'm going to do the fair thing and measure your offering against other SmashWords SF novels. Therefore, you get full marks. But I hope you'll give some thought to the observations above. You display considerable writing talent in this book; some attention to good timing and consistent characterization would make you one of modern SF's stars. Also, I hope you'll give your readers more of a reason to cheer for Mankind in future novels; there wasn't much of one here!

You have subscribed to alerts for Becky Black.

You have been added to Becky Black's favorite list.

You can also sign-up to receive email notifications whenever Becky Black releases a new book.