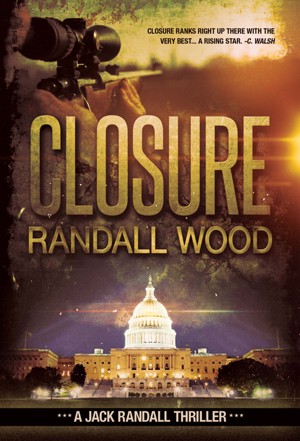 By Randall Wood
Rated 4.50/5 based on 2 reviews
Closure is a thriller of 440 (PB) pages with political and police procedural themes and is the first book in the Jack Randall series. Told from the sniper's and his pursuers point-of-view, Closure will keep you glued to the page as the killer, and the FBI team assigned to catch him, travel from target to target before their fates finally converge on live television in the nation's capital. More
When a prominent lawyer is shot while waiting at a suburban stop sign it sets off a nation-wide manhunt for an elusive killer. Special Agent Jack Randall of the FBI finds himself appointed to track down and stop the shooter. Not by his superiors, but by the killer himself.

As more bodies fall the shooter takes his message to the press, earning the support of the public with his choice of targets and confounding the FBI at every turn. From the desert of Nevada to the urban jungle of New York City, Jack and his team follow the trail of bodies and haunting messages left behind by the killer. With the pressure to find him mounting on Jack, the assassin’s crimes grow bolder, and his message more sinister and closer to home.

It becomes clear to Jack that in order to find the shooter, he may have to look inside his own past, and become the man he was years ago.

Randall Wood is the author of the thriller Scarcity, as well as the previous novels Pestilence, and Closure. Before becoming a novelist Mr. Wood spent his years in several occupations ranging from Army paratrooper, to Teacher, to Flight Paramedic. Finding time between missions and 911 calls, he would pen short stories about his co-workers featuring the odd locations and strange situations they were called to. Never quite finding his niche, he eventually listened to the little voice in his head and devoted his time to writing full time.

He currently resides in Southwest Florida with his wife Jessica, their three children, one cat, and a soon to arrive but yet to be named Great Dane puppy.

...I don’t think anyone truly plans on being a writer. I know I didn’t. Aside from writing assignments in school, the first thing I recall writing for fun was a short story involving some of my classmates. I made the girls plastic and the boys dense and it was all for a good laugh. This was before the internet, so it was just a few pieces of paper that made their way around the school for a few weeks. But everyone liked it and asked for more, so I’d do it again every once in awhile and it was always well received. But it never went beyond that until the yearbook came out and I found out I was the “Class Writer”, whatever that meant. I should have seen the light then, but I had other plans.

Escaping the small town I grew up in was priority one, and joining the Army to see the world was plan two or three, I forget which. Doing so as a pilot had once been plan one, but that had been shot down early by poor eyesight. A lack of superior athletic ability, coupled with a desire to leave the classroom behind, placed further schooling at the bottom of the list. So it wasn’t a hard decision. The Army raised my spirits and opened my eyes as well. While I loved jumping out of airplanes and I excelled at field craft, I was not a garrison trooper. Putting a creative mind that’s always thinking into such a robotic job just didn’t mesh well. Being discouraged from thinking is suffocating to us writer types, so the Army and I parted ways after several years. But I’ll always be grateful for what it taught me, most of which has served me well.

They tell you to never volunteer, but being adventuresome at the time, I raised my hand when they asked for people to be cross-trained as medics. It was one of the best decisions I ever made. After leaving the army and obtaining civilian licensure, being a paramedic was never less than a part-time job for many years. Eventually I found my way to a helicopter, then a plane, and then a classroom as an instructor.

But there were always the stories, ideas in my head that had to come out. The habit of writing short tales about my classmates, fellow soldiers, students, and adventures as a medic continued until I succumbed to the pressure and wrote my first full-length novel, entitled Closure, in 2009. From there the writing genes kicked into high gear and it’s been a book a year ever since.

The only bad thing that I’ve found about writing is that it really cuts into my reading time.

This book is very good. Recommended

Absolutely brilliant book, I cannot believe a book this good is available for free. I cannot find one negative comment to make.

You have subscribed to alerts for Randall Wood.

You have been added to Randall Wood's favorite list.

You can also sign-up to receive email notifications whenever Randall Wood releases a new book.