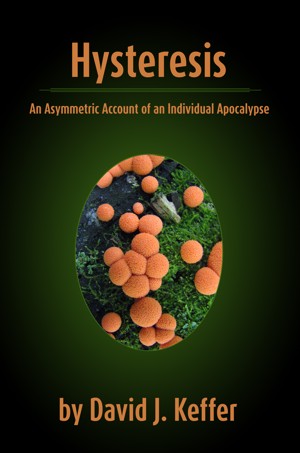 By David Keffer
If St. John the Apostle had been a twenty-something twentieth-century post-existentialist, his book of revelations would have described a much different apocalypse, one tailored to fit a more independent and inward-focused generation. Hysteresis, the description of a path in which the distinctions between coming and going govern the outcome of the journey, provides such an alternate revelation. More
In an imaginary land, the eternal battle rages between the forces of darkness and the forces of light. Upsetting a long established balance, the forces of darkness have revealed a mysterious secret weapon, capable, so they claim, of finally providing the means for them to escape from their prison and return to ravage the lands of the forces of light. The forces of light, for their part, have hidden their own secret weapon in the center of the sun, where it remains beyond their reach, because they are possessed of a profound ambivalence regarding the outcome of this engagement. When they discover that the leadership of the forces of darkness share their perspective, one would think that an amiable resolution is at hand, but that turns out to be as far from the eventual truth of the matter as can be imagined.

As a literary conceit, "Hysteresis" examines the symmetry between darkness and light and creates a combined diplomatic and military campaign intended to capture the nuances of the internal debate regarding the lure (or lack thereof) of each force. In short, "Hysteresis" is exactly as described: an asymmetric account of an individual apocalypse.

In the interests of full disclosure, the author has provided a second subtitle as well, which is relayed here, cryptic and self-deprecating though it may be: Tragicomedic Juvenilia of a Melodramatic Amanuensis.

"Hysteresis" was written from March to September, 1995 in Minneapolis, Minnesota.

David J. Keffer was born in Kansas City, Missouri. He pursued a technical education earning a B.S. in Chemical Engineering from the University of Florida and a Ph.D. in Chemical Engineering from the University of Minnesota. After a year as a post-doctoral scholar at the U.S. Naval Research Laboratory in Washington, D.C., he began his career as an engineering professor at the University of Tennessee in Knoxville, where he remains today. He has published about 100 technical papers in archival journals. He was awarded a Fulbright Grant to learn and to teach about sustainability in Seoul, Korea.

Outside of engineering, David Keffer studied world literature and creative writing. He has published analytical articles on the works of Primo Levi and Kobo Abé. He created various reading aids to several classical Chinese novels. Over the past two decades, David Keffer has been active writing novels, poetry and stories. Several novels and illustrated stories are available from the Poison Pie Publishing House at http://www.poisonpie.com.

David Keffer lives in Knoxville, Tennessee with his wife, Lynn, and two children. As a family, they enjoy hiking through the local mountains and are always on the look-out for poison pie and other ambivalent mushrooms that dot the landscape.

You have subscribed to alerts for David Keffer.

You have been added to David Keffer's favorite list.

You can also sign-up to receive email notifications whenever David Keffer releases a new book.