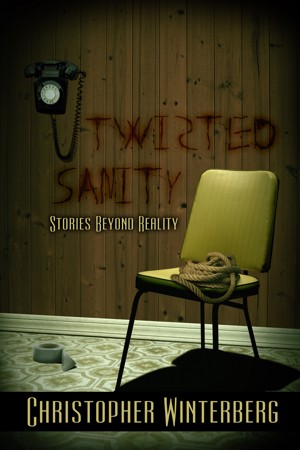 By Christopher Winterberg
Strap in for a wild ride through worlds of obsession, chaos and fear. A literary equivalent of The Twilight Zone, Amazing Tales or The Outer Limits, Twisted Sanity will keep you guessing with sinister and astonishing endings. Seemingly normal scenes quickly become shocking and surreal. Twisted Sanity makes one promise to the reader with each and every story: expect the unexpected.

Christopher Win More
Twisted Sanity is a collection of stories from debut author Christopher Winterberg. Not since The Twilight Zone, Amazing Tales and The Outer Limits has there been such a gathering of unusual, disturbing, fantastic and surprising stories in one collection.

Christopher Winterberg is a new author. He has not been published in any reviews, quarterlies, journals, periodicals, or elsewhere. He has never won a young writers award, middle-aged writers award, or an old writers award. He was never named one of the most famous writers of any generation, era, or century. He is the recipient of zero literary awards. He looks forward to those in the future, if warranted. He has no previous experience as a critic, editor, or publisher.

He has not appeared at any book events, festivals, conferences, or even book signings. He looks forward to those in the future, if invited. He is a member of a writing group, which he rarely attends. He is not internationally or nationally known. This is his first book. He lives on Planet Earth with two dogs. You can find out more about Christopher at chriswinterberg.com. If you’re daring and wish to, you may contact Christopher Winterberg either through a post on his website, or at info@chriswinterberg.com

You have subscribed to alerts for Christopher Winterberg.

You have been added to Christopher Winterberg's favorite list.

You can also sign-up to receive email notifications whenever Christopher Winterberg releases a new book.