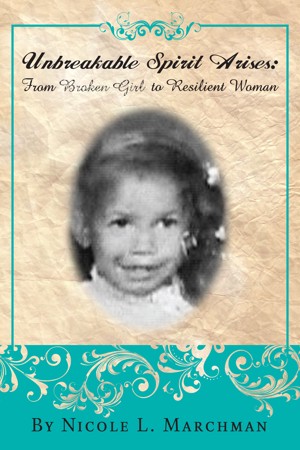 By Nicole Marchman
Unbreakable Spirit Arises is a message of hope, healing, strength, and letting go while giving yourself a gift of forgiveness and soaring for your dreams in the midst of your trauma and pain. More
After living in the foster care system most of her childhood in state of Florida, and determined not to walk in the same foot steps of her biological mother, Nicole was able to build up courage to spread her wings and her journey into the world of independence and advocating for others to find themselves and their purpose behind such daunting trauma they’ve had to experience. As a result, she has ventured out to work in various roles as: residential counselor, national, international and domestic foster care advocate and now a Outreach Program Specialist over a Homeless and Unaccompanied Youth Program in Hillsborough County. If this isn’t all, she is also a foster parent and wants to share a message of hope, “you can become victorious once you become determined to take your life back from the hands of your abuser!".

Nicole Marchman is a foster alumni and a survivor of sexual and physical abuse, and domestic violence. Most of Nicole’s life was spent dodging in and out of trauma, and the pain and anger from the hands of her biological parents, abusive ex-husband and various foster homes that were supposed to have her “well-being” held near their hearts. She became good at navigating the cycle of abuse, to the point resiliency found its way into her life. Rather than allowing her past to suck away her future, Nicole bettered her life and is determined to share her testimony to others across the globe.

Nicole earned her Bachelor of Social Work (BSW) from USF and her Masters of Social Work (MSW) from Florida State. As a Social Worker, Nicole traveled to children’s homes in the Czech Republic and Trinidad & Tobago to study their foster care system and compare it to United States Child Welfare System. Additionally, Nicole became a state-wide, national and international advocate for foster children and lobbied for various changes within the foster care system in Washington, D.C. Nicole specifically advocated for kinship care and better services for youth aging out of foster care. Nicole earned a job as an Eckerd Program Outreach Specialist for the Lazydays Homeless Youth Program, where she continues to work to stop the evils she once encountered.

Nicole believes in paying it forward. She has proven this by furthering her passion of changing the lives of foster children, by becoming a foster parent and providing a home she never had. Every day, Nicole wakes up and believes we each can make a rippling effect into the lives we touch. It starts with one person at a time.

You have subscribed to alerts for Nicole Marchman.

You have been added to Nicole Marchman's favorite list.

You can also sign-up to receive email notifications whenever Nicole Marchman releases a new book.