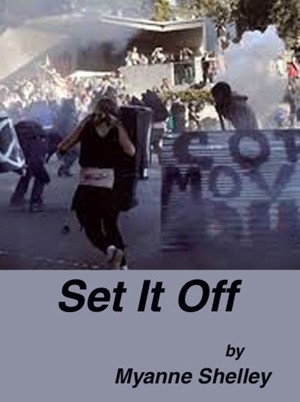 San Francisco nonprofit worker by morning, cat volunteer by some afternoons, writer by others.

JJ Carlisle is the worst kind of spoiled; a grown adult with a sense of entitlement and a family that indulges it. Surprisingly, he’s done well or did well. Computer savvy, he hooked up with a tech startup and scored big only to lose it all in the economic crash.

Of course, the downturn in the economy is not his fault; neither is the fact that he never saved a penny of the hundreds of thousands of dollars he made. Now he’s broke, angry and looking for someone to blame.

Participation in Occupy Oakland is the perfect outlet, and during a demonstration, he’s arrested for assault.

Set it Off sounds like it could be an interesting story with contemporary issues, action and politics. It isn’t and here’s why.

Rather than start the story with an action-filled inciting incident - the demonstration and the arrest, Shelley chooses to begin with JJ being bailed out by his sister, Jackie, and step-sister, Karen.

The next few chapters flash back to the three character’s childhoods. It’s backstory and not very interesting at that, though there’s a bit of character development and the reader gets a sense of the relationship between the three.

Then we’re back to the present, and everyone is gathering for their father’s eightieth birthday. There’s lots of reflection but no drama; not even a family feud.

Occasionally, JJ meets up with his pals from the Occupy Oakland movement, but they’re hardly radical and more philosophical than violent.

I kept anticipating something would happen, but nothing does. The story just peters out.

Shelley writes well. Her dialogue is authentic, and her characters are well-drawn, the problem is they’re unsympathetic. Besides being boringly normal, they’re timid and whiney.

But what makes Set if Off so lacklustre a read is the fundamentals of storytelling are missing: Goal, Motivation and Conflict.

The goals of the three main characters are so vague as to be non-existent. Without goals, there’s no conflict. How can there be conflict when everyone is more or less satisfied with their situation, or at least too unmotivated to do anything about it?

Add to that Shelley’s passive writing style - the author prefers to have the characters explain what happens than have them actively engage in the events.

These deficiencies represent lack of craft - beginner’s mistakes. They would have been easily identified by peer writing groups or instructors in writing courses. Reading books on how to write fiction can also be helpful though nothing takes the place of an honest, constructive critique by a writing professional.

Shelley’s books get credit for their evocative covers as well as being professionally produced and edited - error-free.

I started reading this because of the occupy reference. But mostly it's a family melodrama and very slow moving. I ended up skipping all the melodrama, flick-reading until I got to the sections involving occupy which were somewhat interesting.

I would guess this is based closely on the author's own experiences.

Quite a captivating story – a whole family history of how someone might get radicalized and how others might miss the signs.

You have subscribed to alerts for Myanne Shelley.

You have been added to Myanne Shelley's favorite list.

You can also sign-up to receive email notifications whenever Myanne Shelley releases a new book.